The Meaning of “Figurative Language”

This friendly English teacher welcomes you to one of the most important lessons in ELA and life! Now for the definition you’ve been waiting for… The term “figurative language” refers to a kind of language which conveys meaning in an exciting way that isn’t literal. Huh? What is this “literal” business?

“Literal language” refers to plain, “what you see is what you get” ways of writing or speaking: language that means exactly what it says. For example: “Ms. Marshall is six feet tall” is a literal statement because I am mathematically exactly six feet tall. (Yes, I’m shockingly large for a lady.)

In contrast, a figurative statement about my height would be something like, “Ms. Marshall is as tall as a tree!” Now, anyone with an ounce of logic in their noggin would know that I’m not LITERALLY as tall as a tree (unless it’s a short, stubby one that’s just six feet tall), but this figurative language — a simile to be exact — is delightful because it helps the reader get an image of my towering height in a creative way.

What Are Types of Figurative Language?

The exact number of types of figurative language is up for debate (a deliciously dorky ELA debate), but for today, let’s focus on five of the most common and useful kinds. Once you learn them, you can leverage each to spice up your own writing, and to better understand what others are saying. We’ll start with the most commonly known types: similes and metaphors.

The definition of a simile is a phrase that compares two very different things using “like” or “as.” The purpose is to give the reader or listener an interesting new way to visualize the thing that’s being compared. (The key is that the two things have to be very different, and the sentence needs to not be literal. For example, “Zuzu is as tall as Mimi” is NOT a simile because it’s just a literal statement of fact if the girls are both 5’4″ tall.)

Correct Example of a Simile:

Her hair is as soft as a cloud, and when I hug her, her curls press softly against my cheek, making me smile.

The definition of a metaphor is a phrase that compares two very different things WITHOUT using “like” or “as,” in order to give a deeper and more poetic understanding of the thing being compared. (Again, the two things have to be very different, and the sentence needs to not be literal. For example, the sentence “Ms. Marshall is a travel photographer” is NOT a metaphor because it’s just a literal, documented statement of the fact that I travel and take photographs around the world — and enjoy it, too!)

Correct Example of a Metaphor:

After weightlifting five times a day for a year, my muscles are now bulging boulders.

The definition of a hyperbole is a phrase that exaggerates the truth. It states something in such an extreme way that it’s often comically over-the-top. It’s important to be able to spot that this is figurative language, because if you took hyperbole literally, it would be shocking and inaccurate!

Correct Example of a Hyperbole:

“I’m so hungry, I could eat everything in this entire supermarket!”

The definition of personification is a phrase in which something that is not human is described with human-like characteristics. This type of figurative language can help create a vivid scene, but again should not be taken literally because, well, non-human things can’t actually do the things personification has them do. It would be creepy if they did.

The rain ripped the leaves off the trees, thundering with wild laughter as it destroyed the forest.

The definition of onomatopoeia is… sound effect words! This type of figurative language encompasses the written-out version of sounds, such as animal or machine noises. It’s extremely fun to use and to say!

When to Use Figurative Language

Getting the hang of the wonderful world of figurative language? Good! Now the question is: when should you use it? Well, the purpose of literary devices like figurative language is to make your writing or speech more intriguing and artful, so use similes, metaphors, and so on whenever you want to add some pizzazz and pop to your prose or poetry. Figurative language can help add depth and emphasize a point, all while being beautiful.

When should you NOT use figurative language? Use these literary devices sparingly if you’re speaking with someone who needs a clear, direct answer — aka, a lover of the literal — or a person who is still in the process of learning English, who may therefore misunderstand figures of speech. In other words, do not use the hyperbole, “I’m so hungry that I could eat a horse!” with someone who might then go out and cook you a horse to consume.

So what about you? What’s YOUR take on figurative language? Which is your favorite type, and how do you like to use it? Do share! 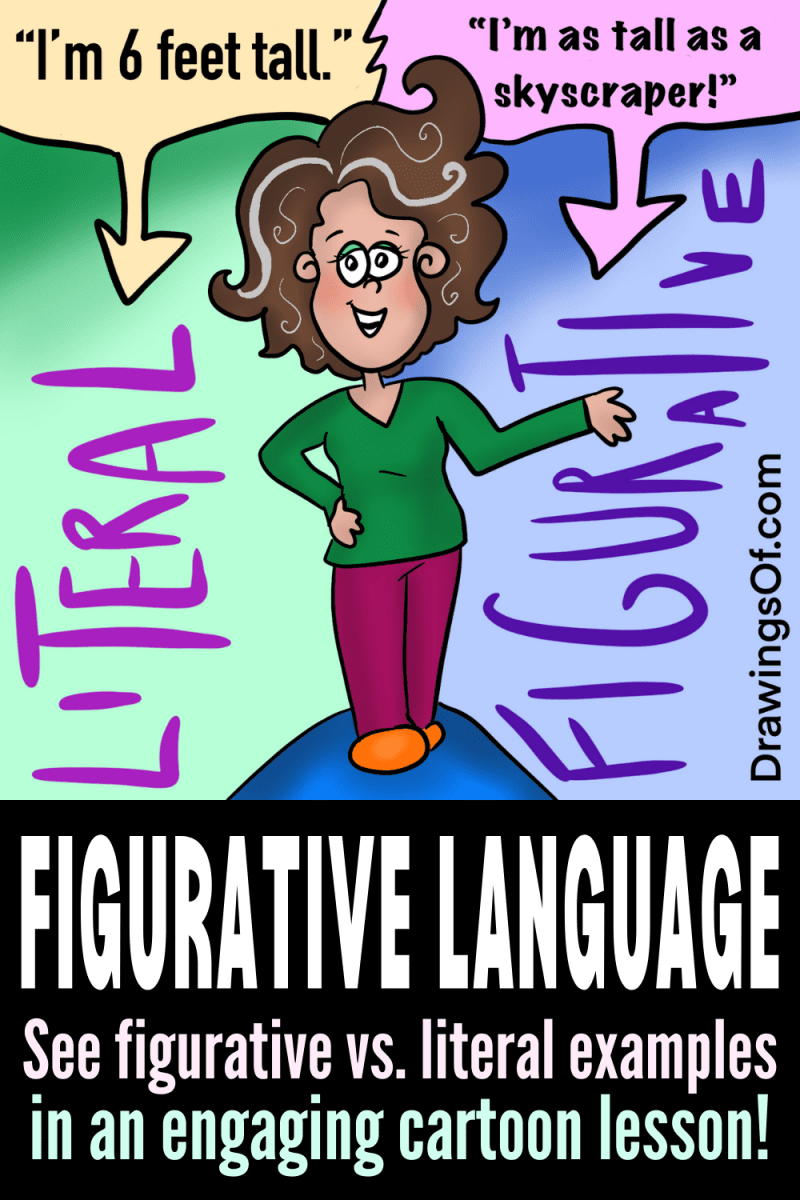 This article really helped me understand figurative language! I love the drawings too

Thanks for reading, Noah!

I like the examples, and I also really like the illustrations that you use. As they say, a picture is worth a thousand words :)

Thanks, Biana! That's the idea!

I love this lesson! I always use figurative language while telling a story as I believe that it helps makes it more exciting. My boyfriend's cousin always said, you are allowed to exagerate any story by 30% for the sake of keeping the listener engaged while still maintaining a truthful and accurate story - figurative language helps becuase its exageration for humor sake!

Haha! Hyperbole for the dramatic win!

Great post and artwork. Brings the info to life. My son enjoyed revising the language techniques :)

Appreciated! Glad your son liked it!