Ahh, the English language — so full of hard words to spell! Allow this artistic, experienced English teacher to guide you through a growing list of commonly misspelled words — with fun tricks to remember each correct spelling, illustrated by hand-drawn cartoons…

What Makes a Word Hard to Spell?

Let’s start by giving an answer to what makes certain words so difficult to spell. First, some English words are tough to remember because the vowels are hard to sound out, such as with the word “separate.” Others are confusing because they’re similar — but not identical — in sound and spelling to other words, as with “desert vs. dessert” and “later vs. latter.”

Other spellings are hard because it’s challenging to decide whether they’re written as one word or two, as with “workout.” Still others are tricky because they are homophones: two words that sound the same, but are spelled differently, and mean different things, like “awe or aww.”

Hard Words for Which Age?

When people think of the hardest words to spell in English, their minds often go straight to the longest word in the dictionary, “pneumonoultramicroscopicsilicovolcanoconiosis” (meaning a type of lung disease caused by breathing in tiny particles of silicate or quartz dust) or “antidisestablishmentarianism” — but the reality is that those words are so rarely used that it’s not really even worth learning to spell them.

No — in fact the REAL hardest words to spell in English are the short but tricky ones! Hint: the last word on this list is just three letters, but stumps the most experienced English spellers out there. 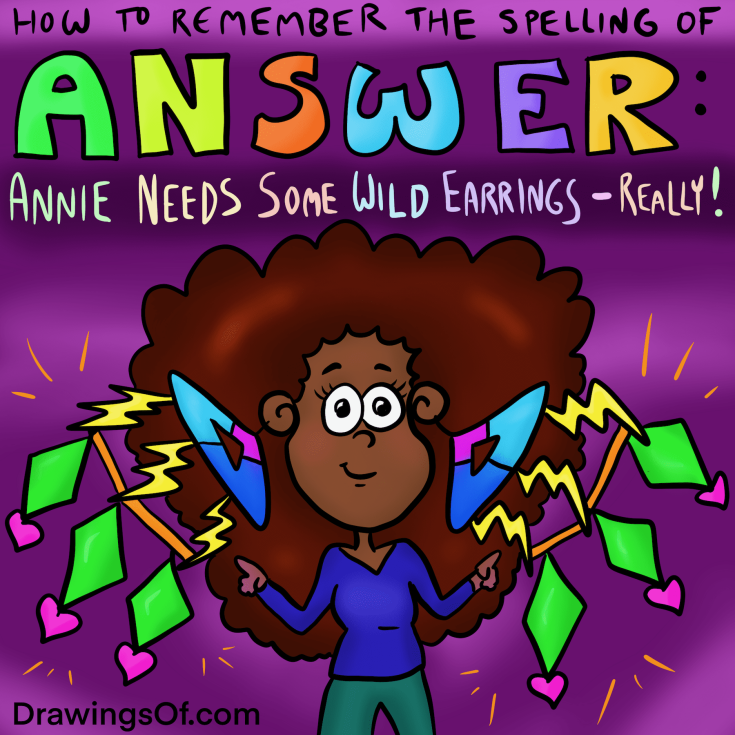 The word "Answer" is hard to spell because of its silent "W" in the middle, and the hard-to-guess vowel that comes before the "R," due to its pronunciation. See the cartoons I drew in the link below for two funny ways to remember how to write this word. 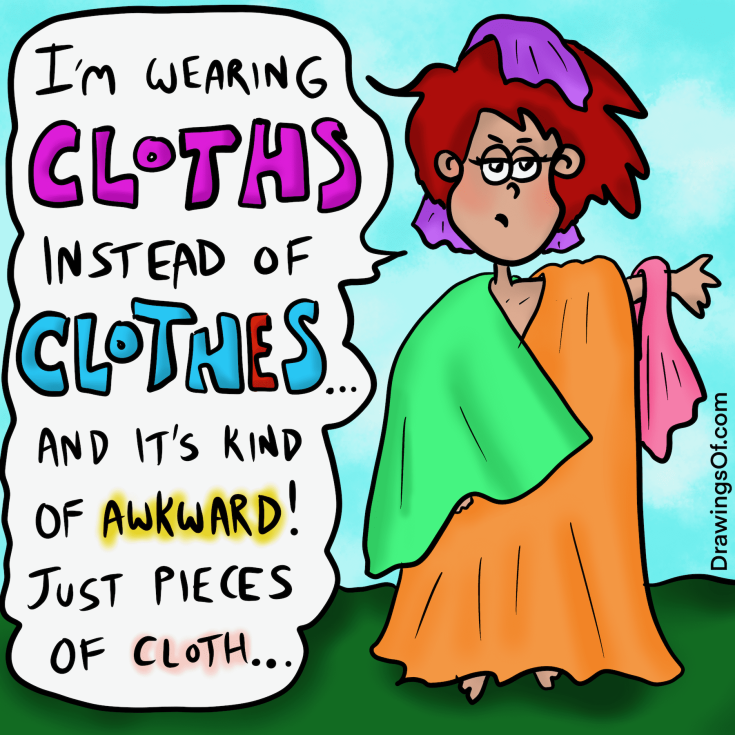 "Clothes" are the articles of clothing you put on your body, while "cloths" are pieces of fabric. With all the frequently misspelled words on this list, you can click the "Continue Reading" button to get the full lesson and article. 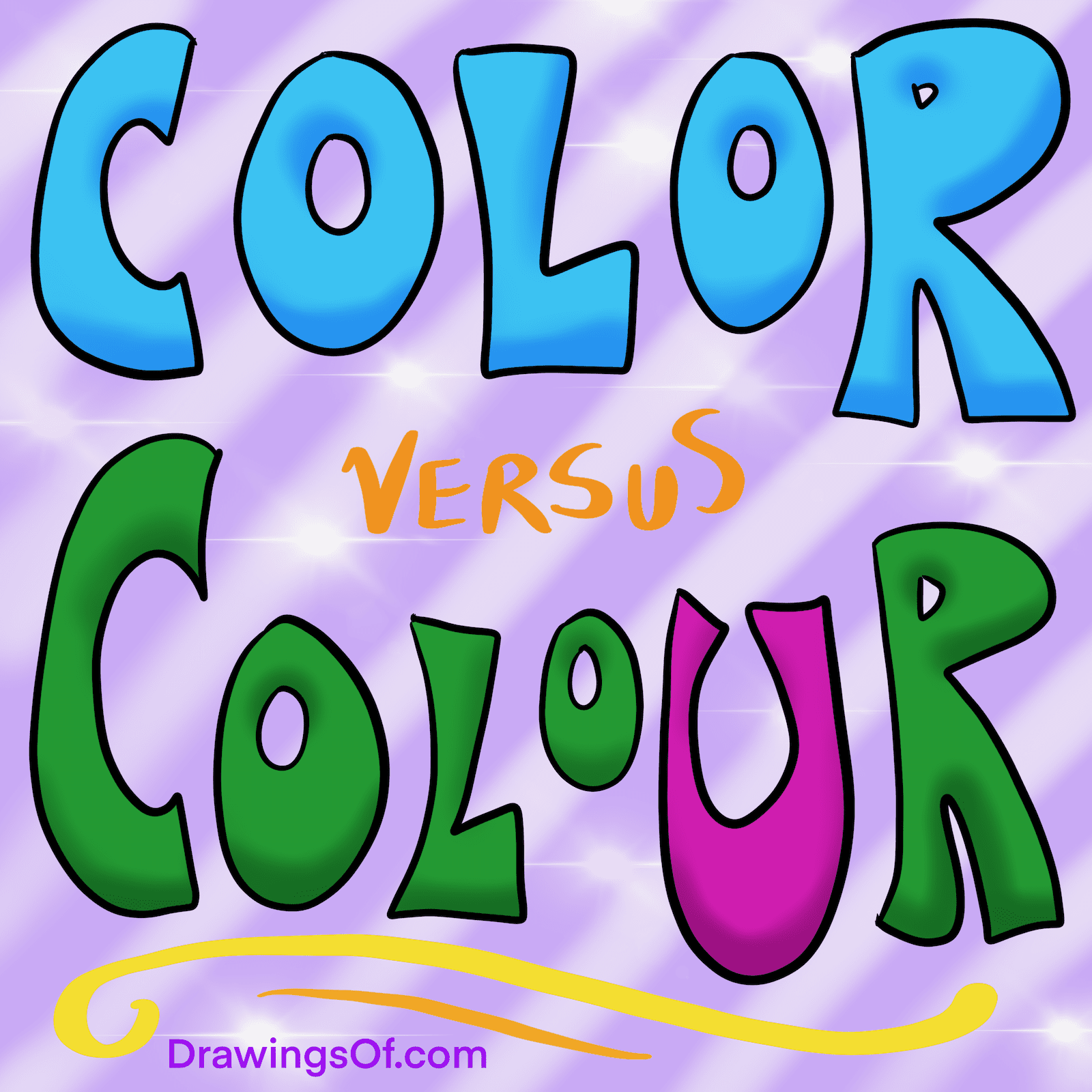 "Color" is the U.S. English version, while "colour" is British, and used in all places where British English is spoken (from Canada to India). Learn the wild story about the origin of this difference here... 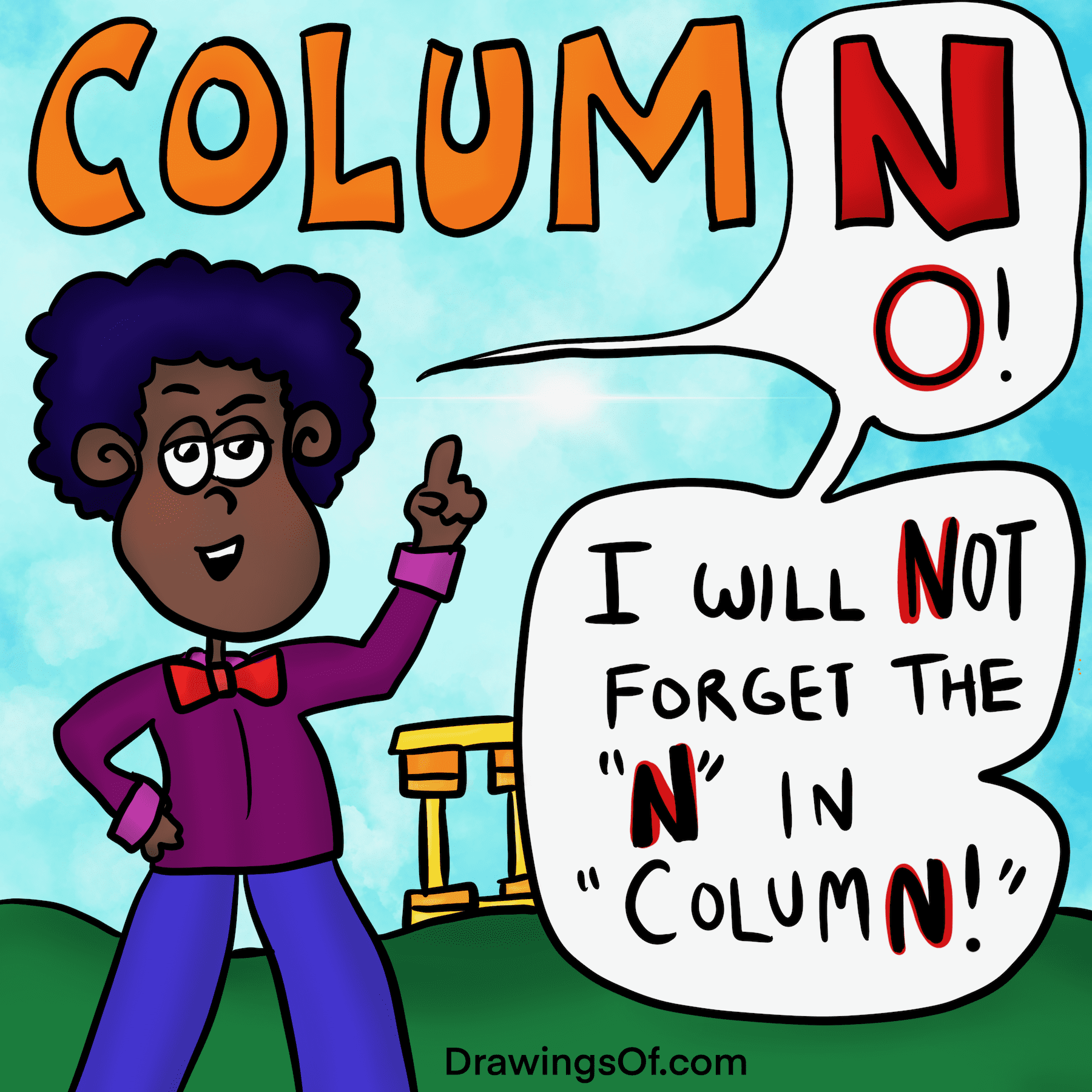 The trickiest part about spelling the word "column" correctly is the silent "N" at the end. Here are two ways to remember it. 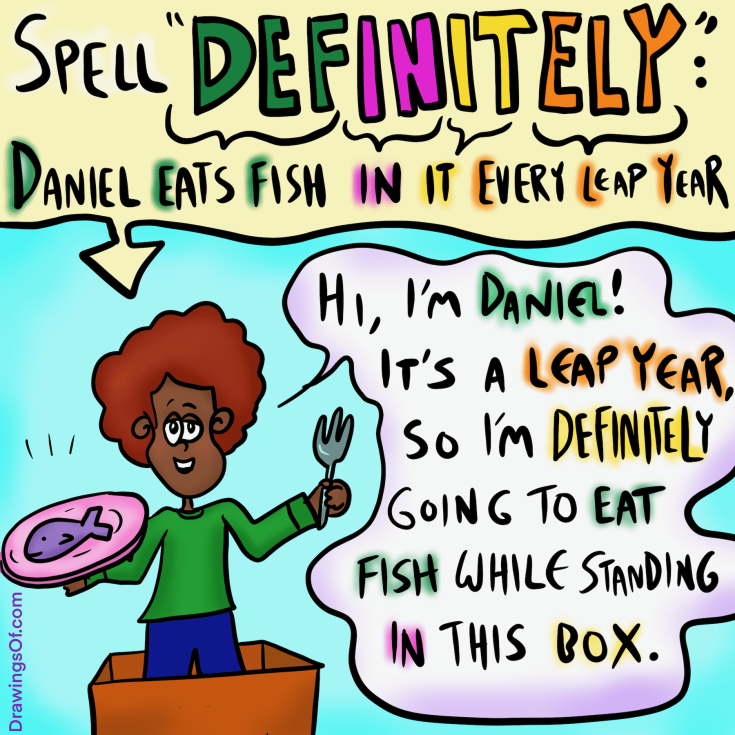 "Definitely" means for sure, while "defiantly" means rebelliously. Learn a funny way to remember the spelling of each by clicking this button. 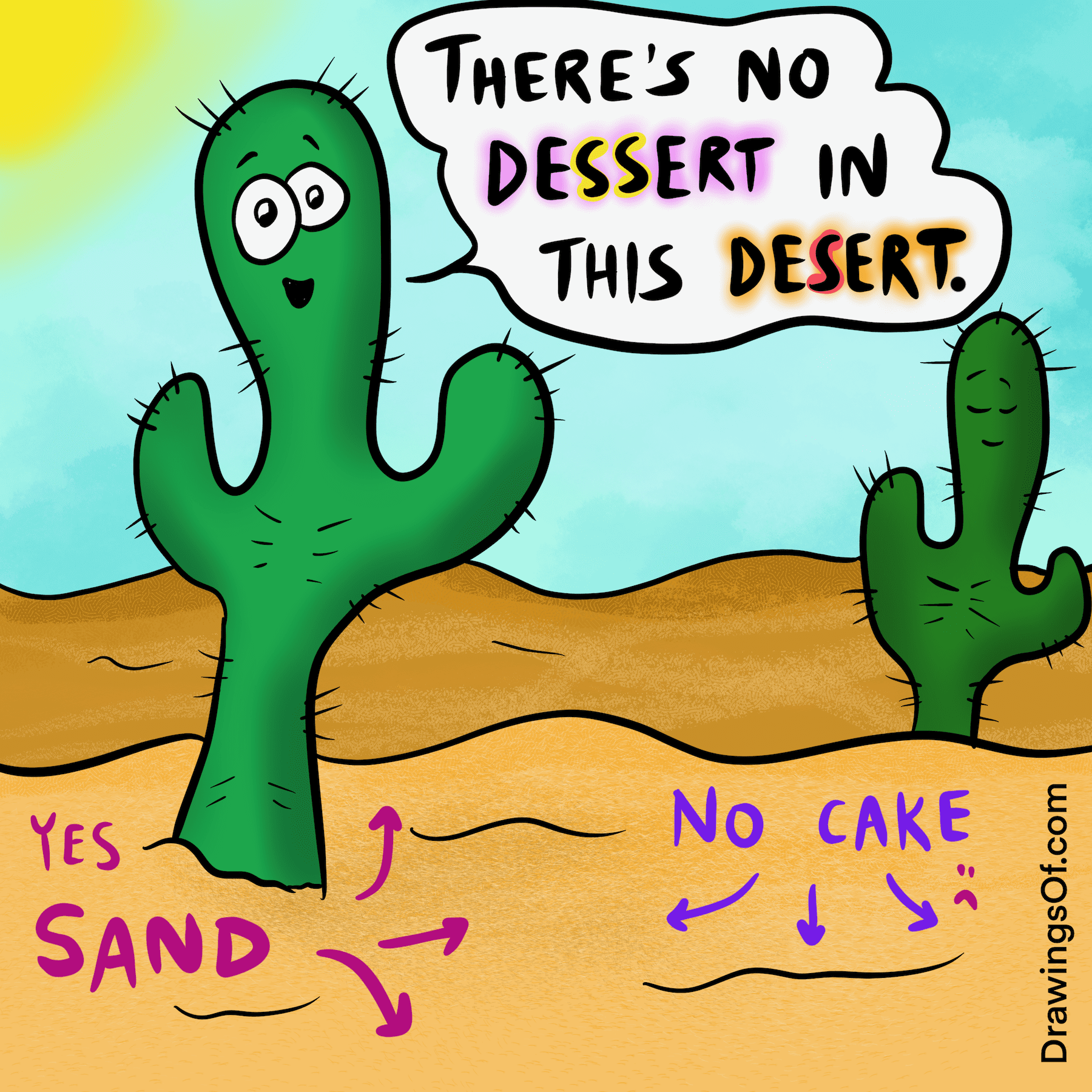 "Desert" is an expanse of sand, while "dessert" is a tasty sweet treat. The "s" in the middle is the key to remembering the difference -- see why here. 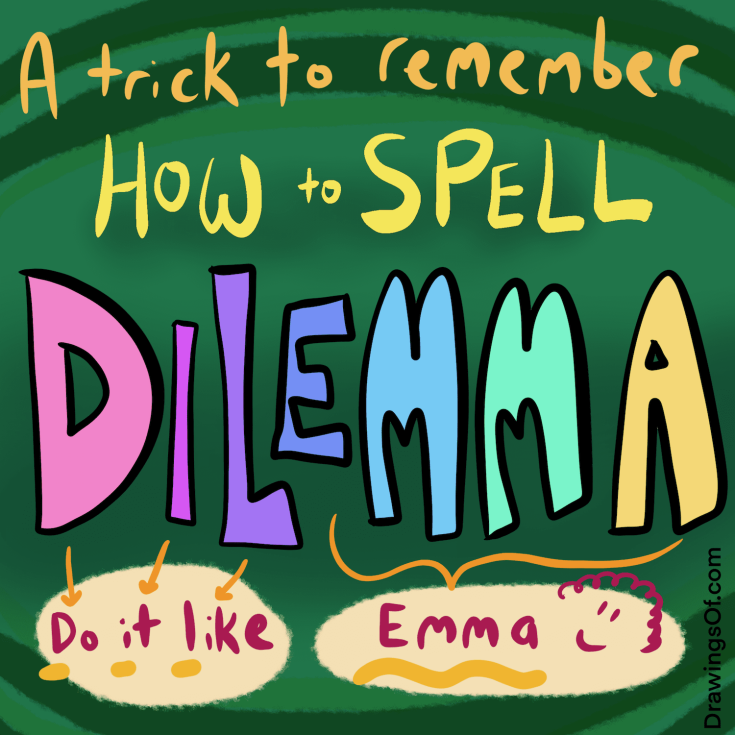 This link has a very silly way to remember the challenging spelling of "dilemma," which quite fittingly means: a hard problem. 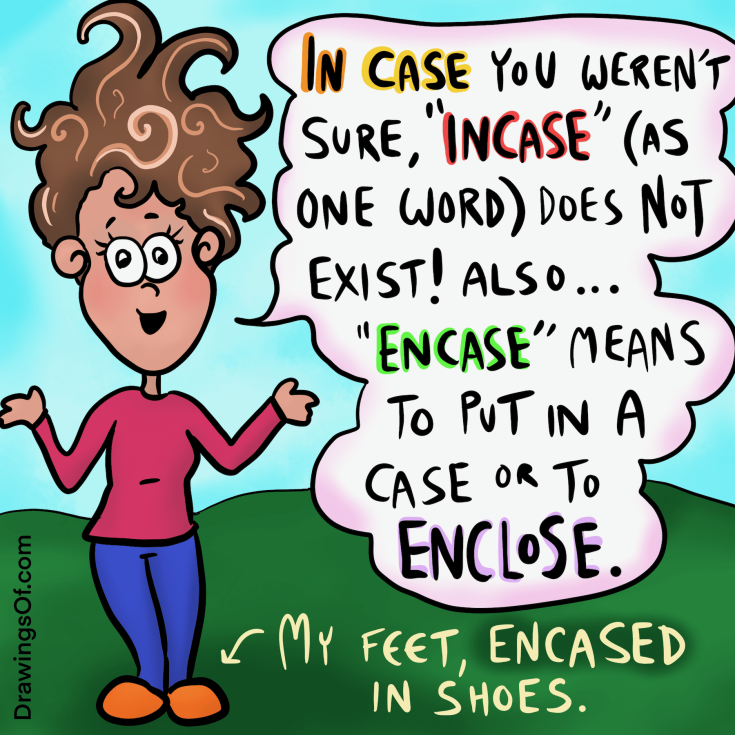 Incase or In Case vs. Encase:

"Incase" is not a word, while "in case" means "in the event of," and "encase" means to enclose. 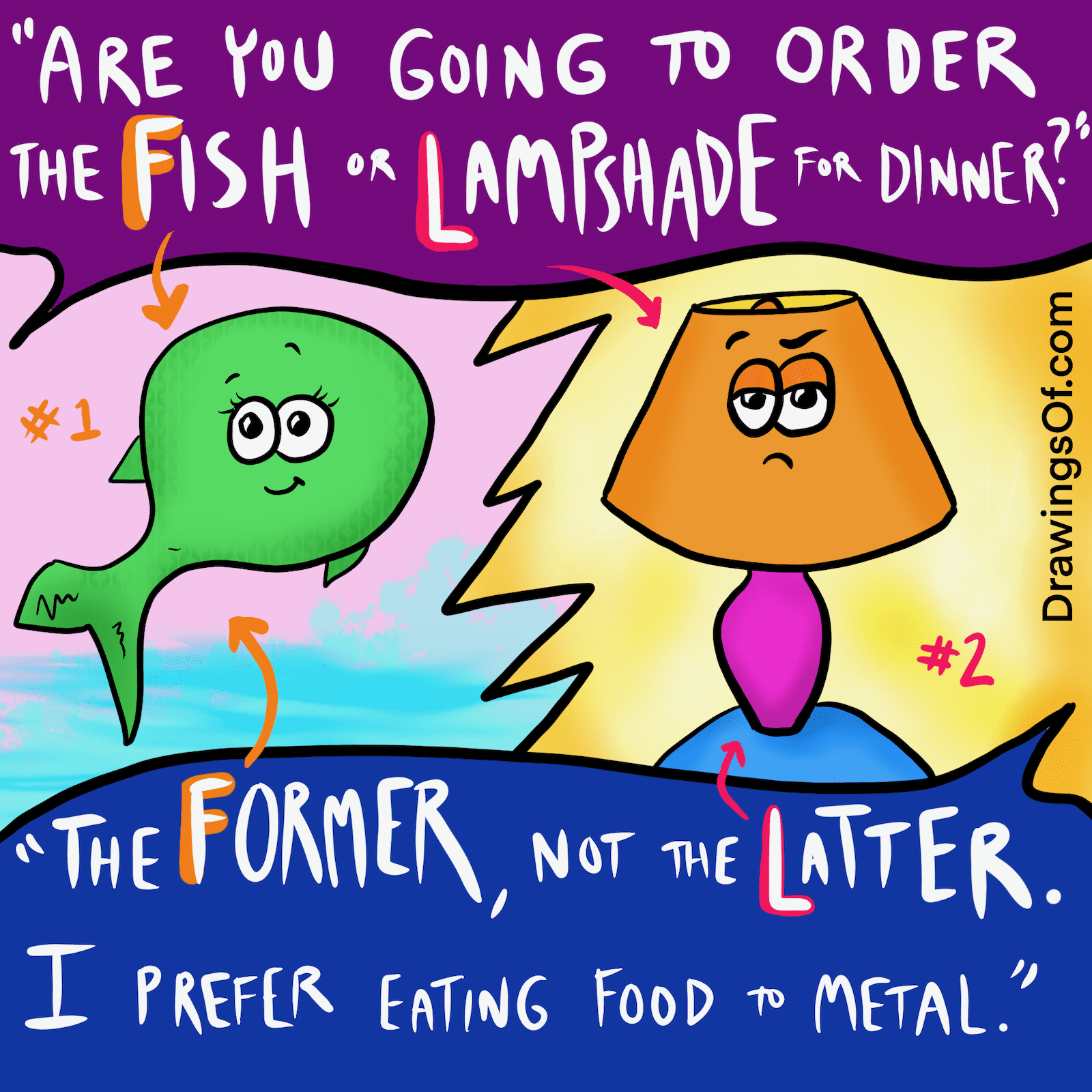 "Later" means at a time in the future, while "latter" refers to the second of two things listed (the first thing being the "former"). 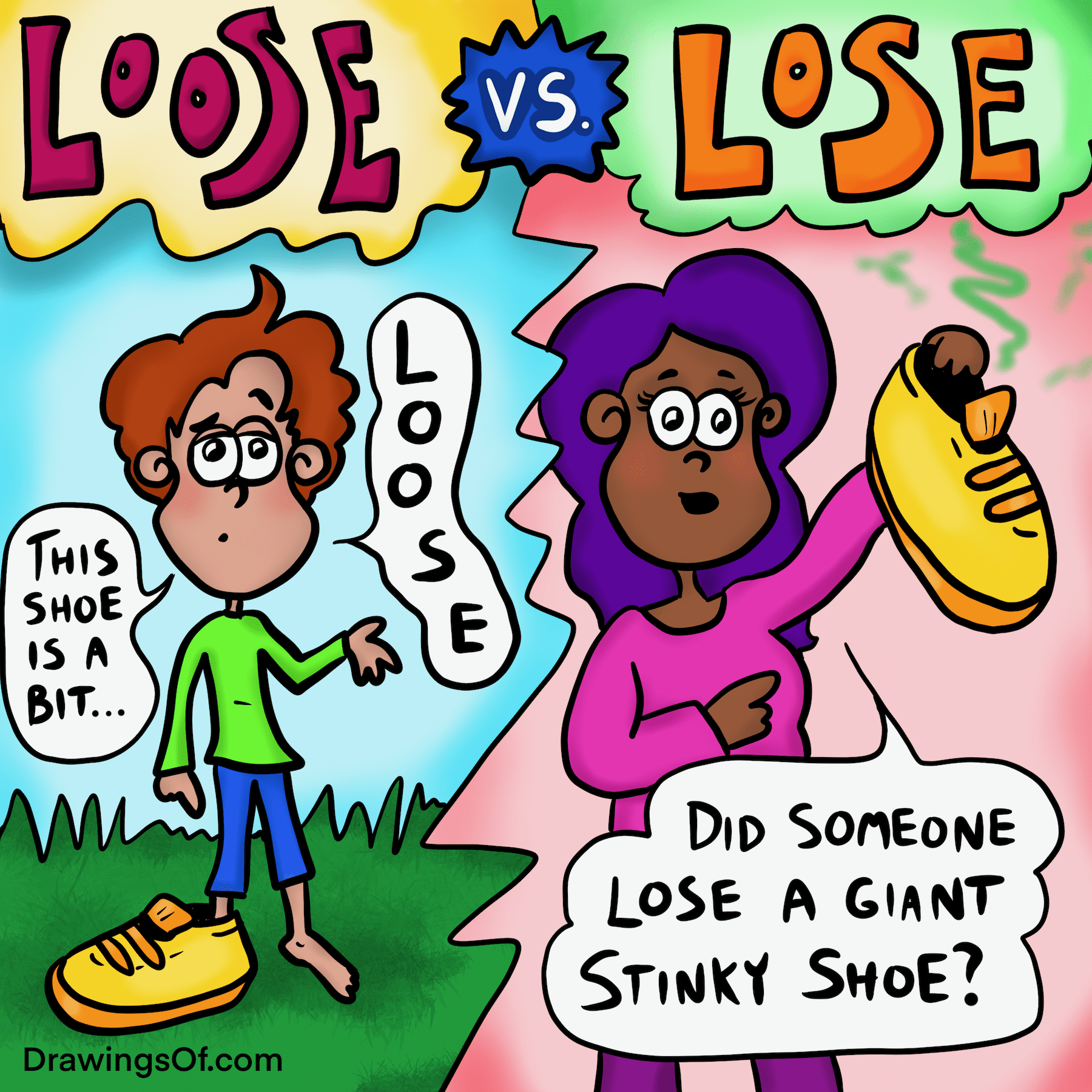 "Loose" means not tight, versus "lose" which means to not have anymore. The "o" in the middle is the key to the memory trick for this hard spelling... 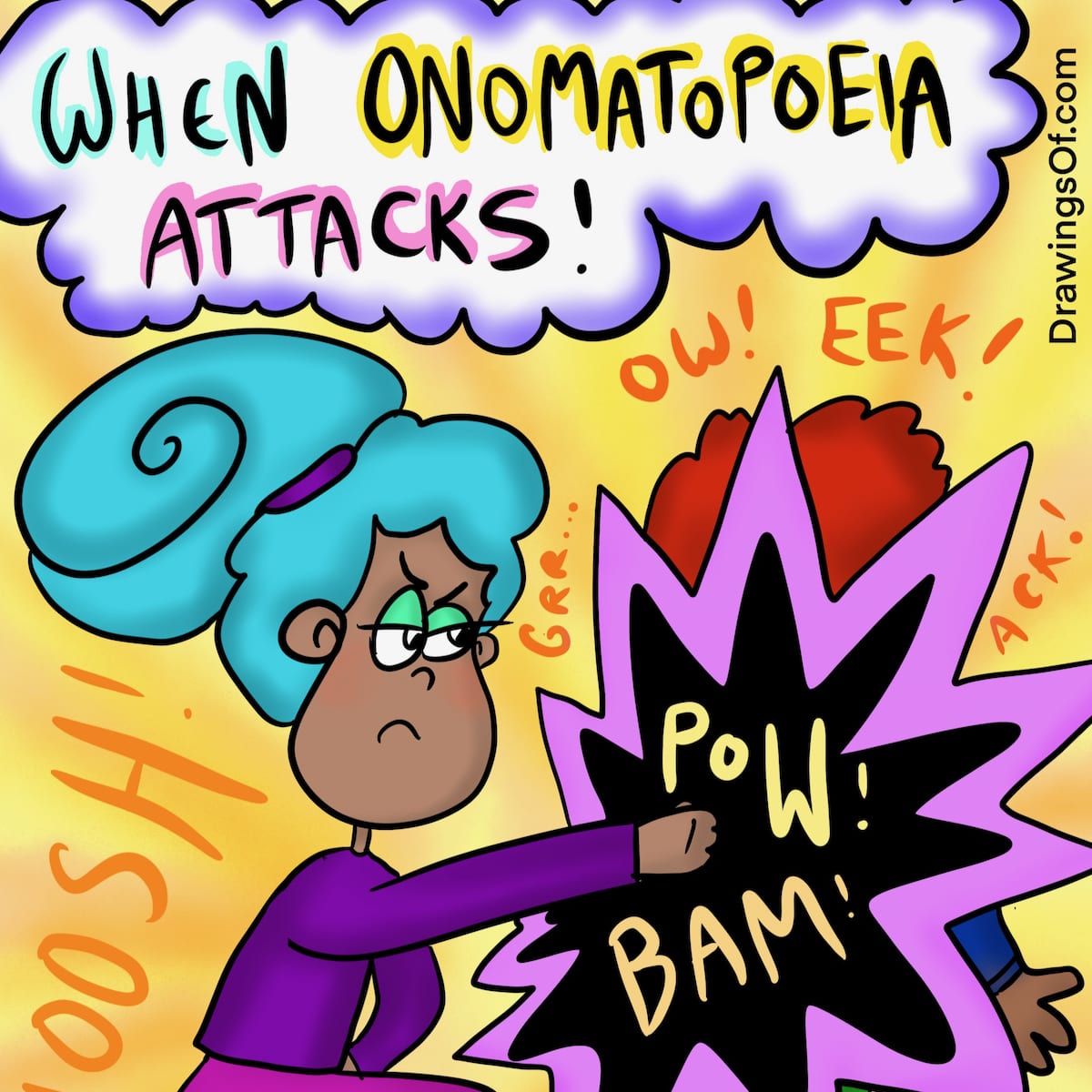 The word "onomatopoeia" means sound effect words like "POW!" and its spelling is difficult! Learn a ridiculous way to remember it here... 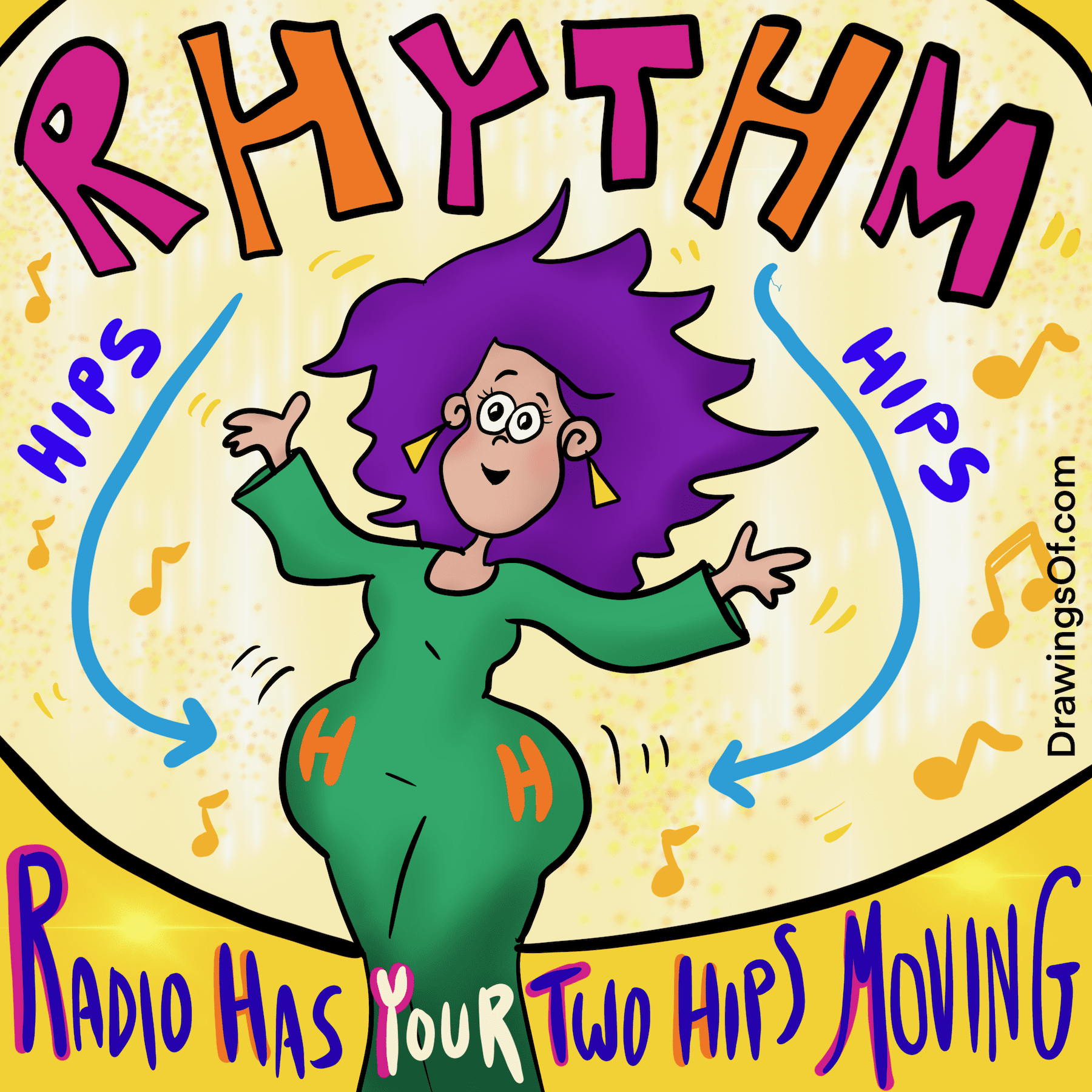 Here are three funny ways to remember the correct spelling of the challenging word "Rhythm" -- including the silly sentence: "Ray Has Your Two Hot Muffins!" 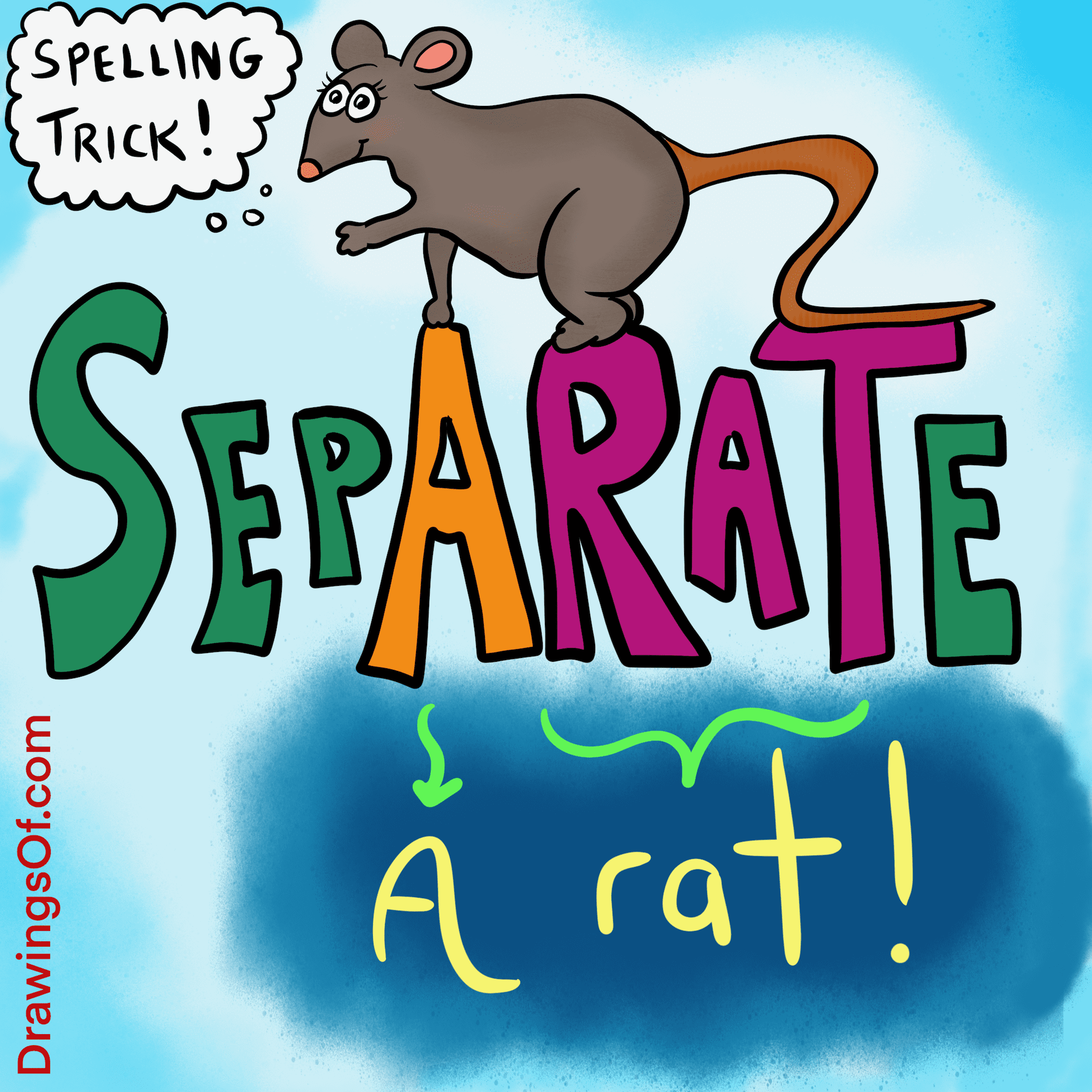 Oh my, is "separate" a hard word to spell! There's an animal that can help you remember the "a" in the middle... 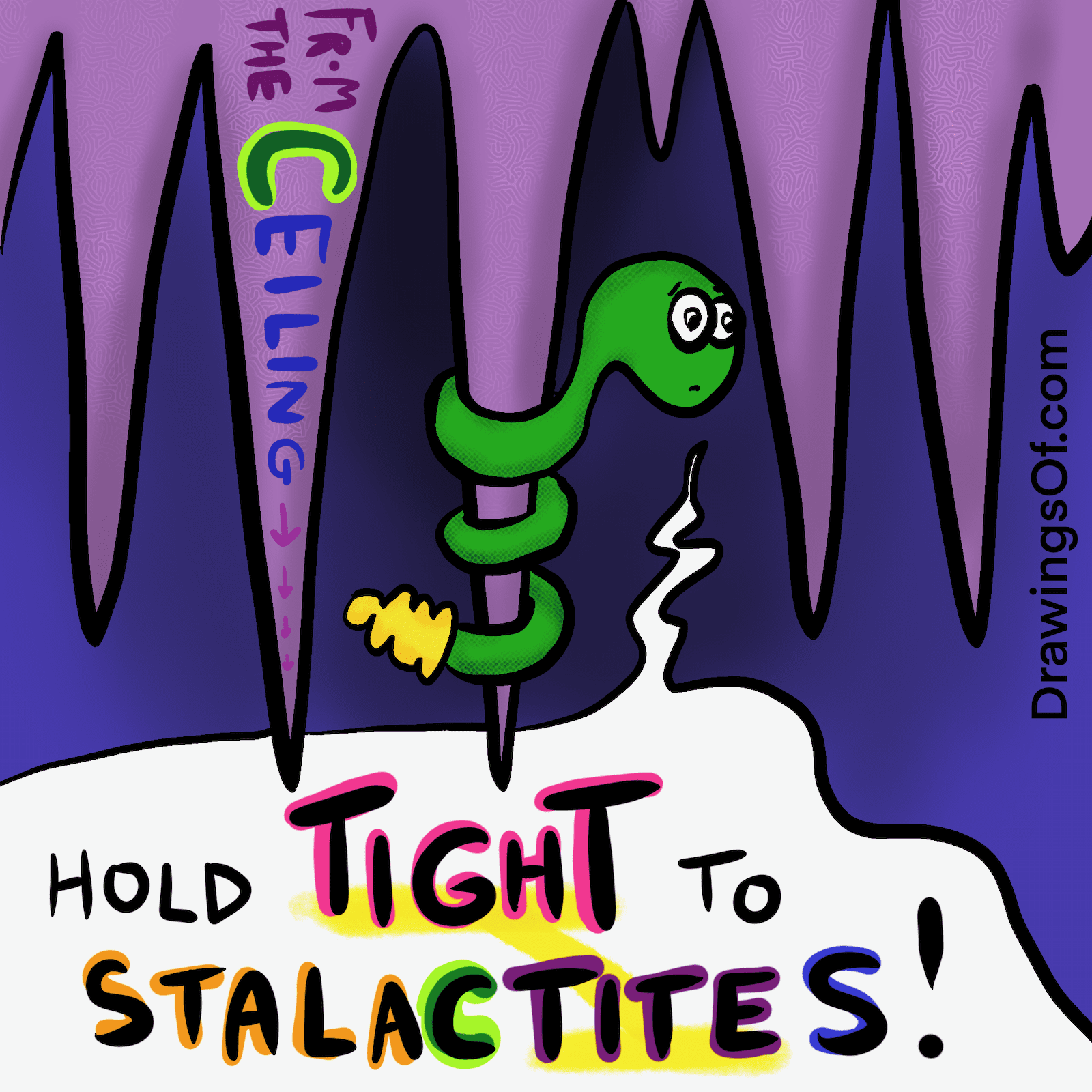 The cave spikes "stalactites" (growing down from the ceiling) and "stalagmites" (growing up from the ground) are frequently mixed up. Learn a way to remember the difference.

One Word or Two?

The next set of commonly misspelled words is confusing due to deciding whether to put a space in the middle to form two words, or leave it out to keep it as one word. Sometimes both forms exist, and sometimes only one does. Let's examine them... 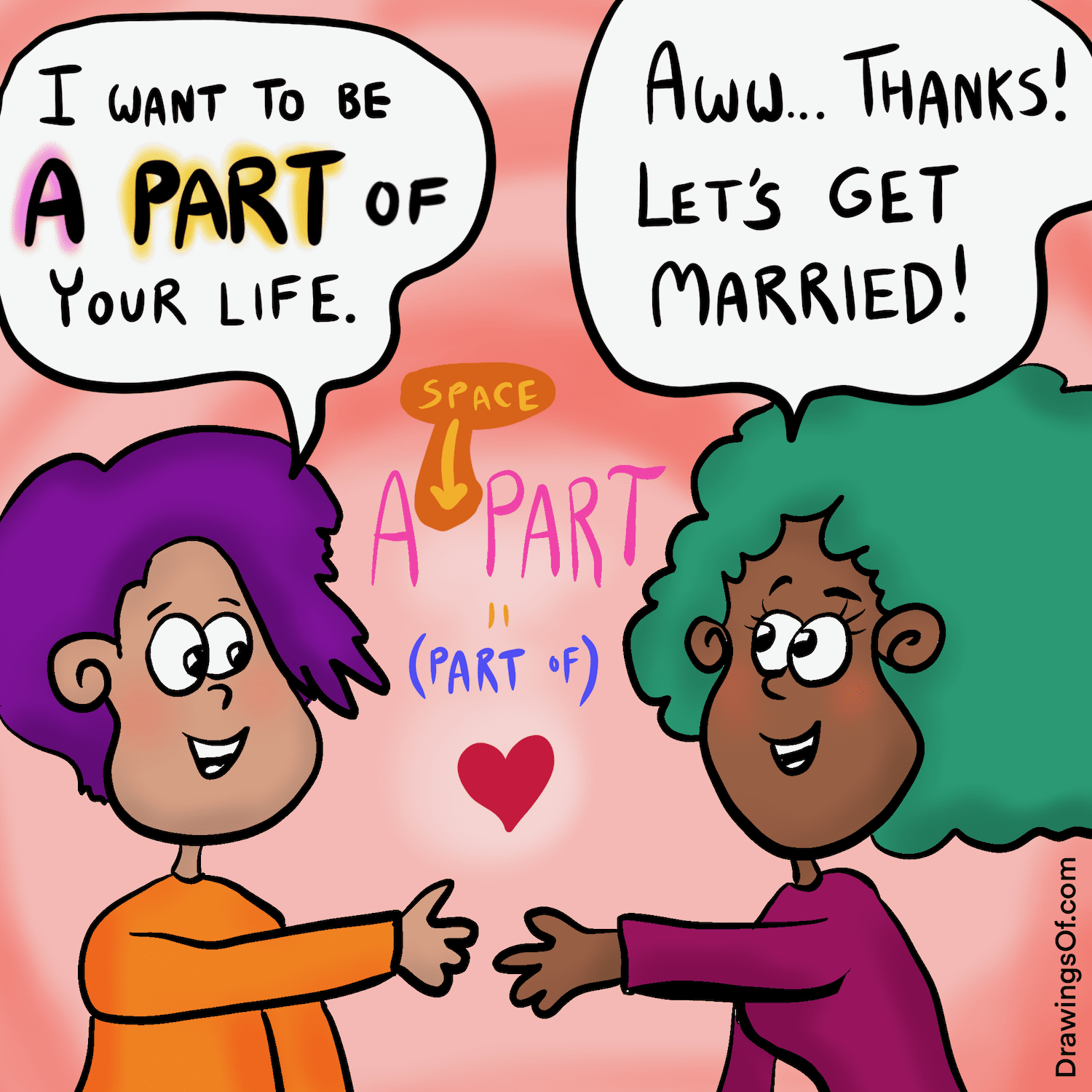 Apart vs. A Part:

These two words have the opposite meaning from each other, so watch out! "Apart" means separate from, while "a part" means part of. 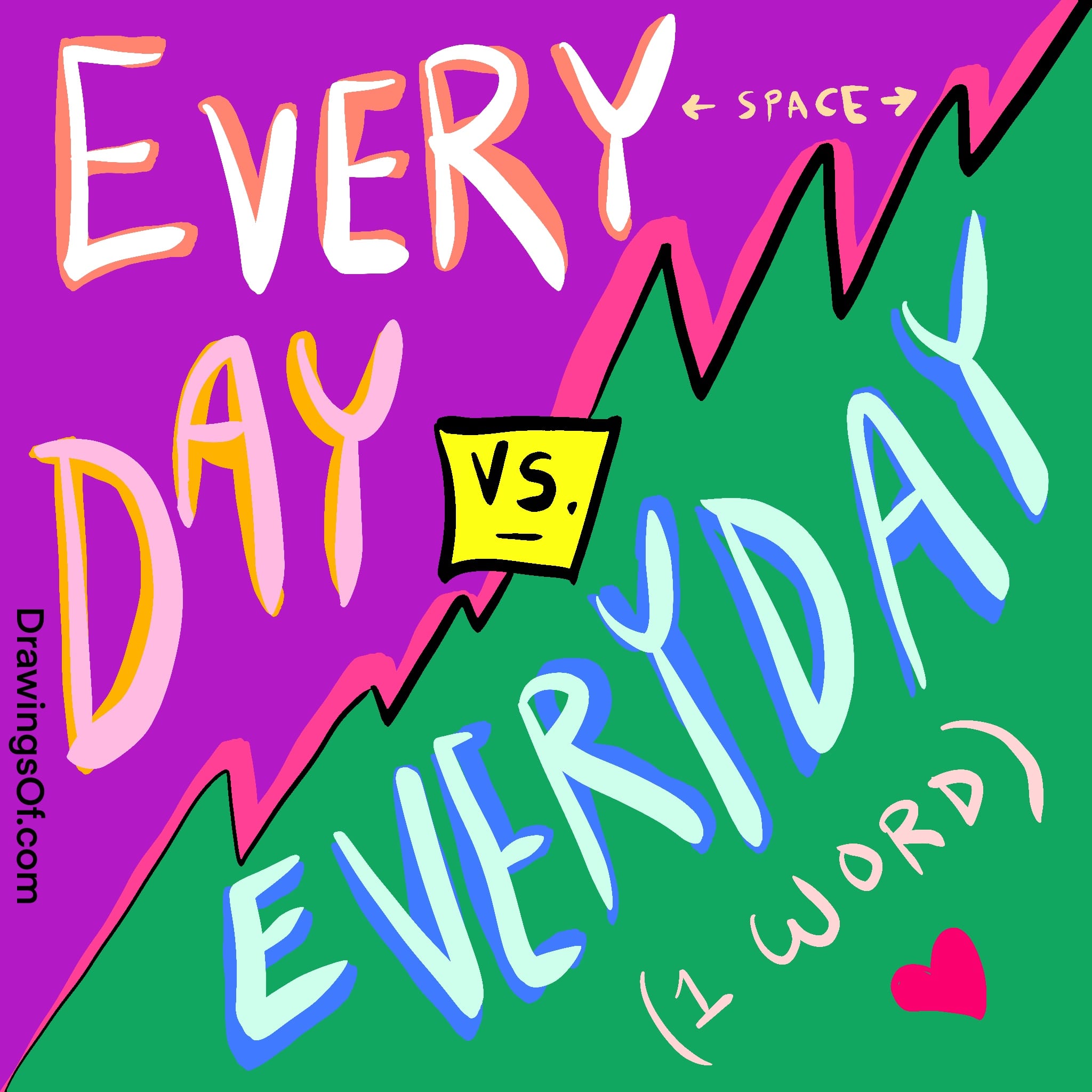 Everyday vs. Every Day:

"Everyday" is an adjective describing something that's used daily, while "every day" explains the frequency something is done. This is easier to understand with the examples and drawings at this link, so click below.... 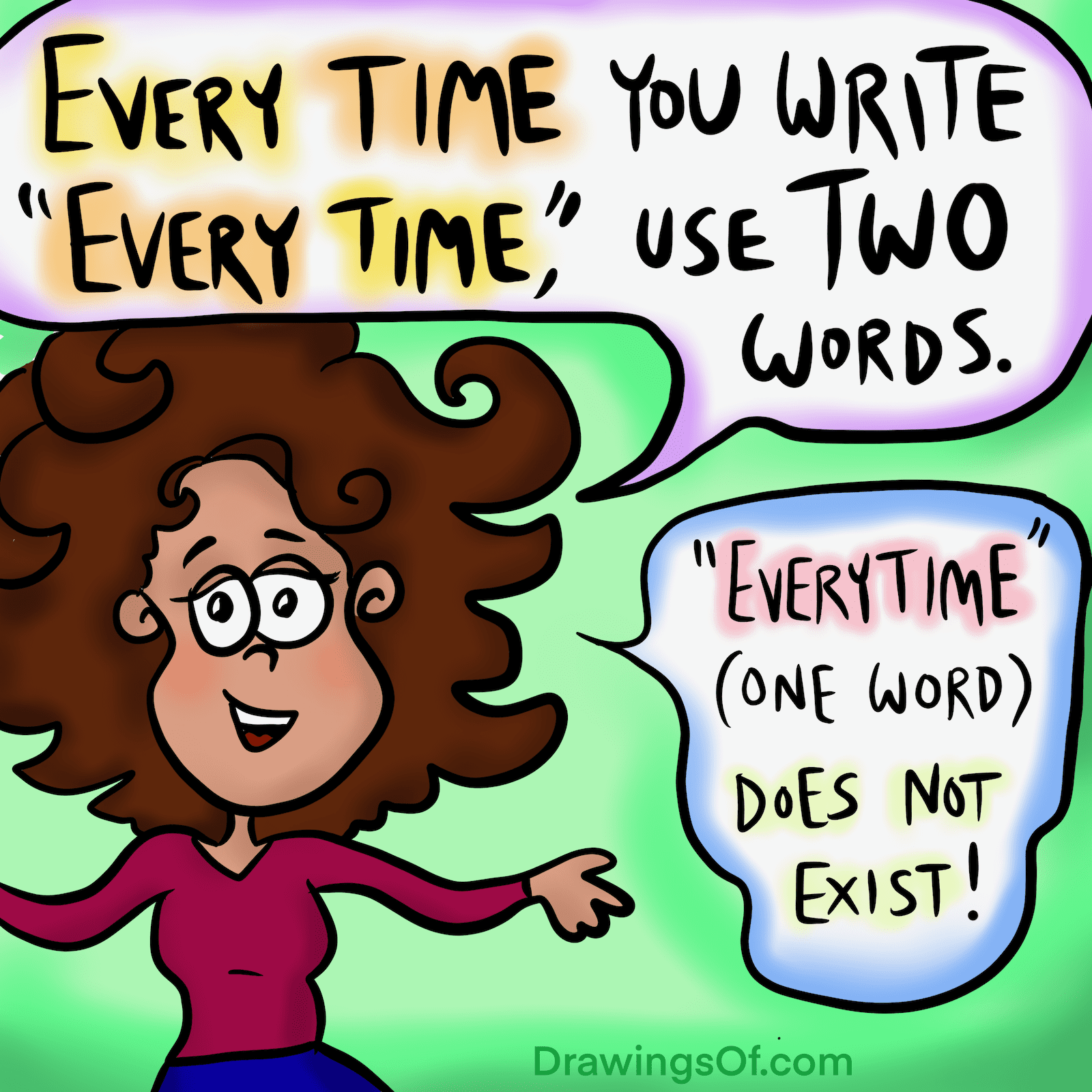 Every Time or Everytime?

The word "everytime" doesn't exist! Simple as that. 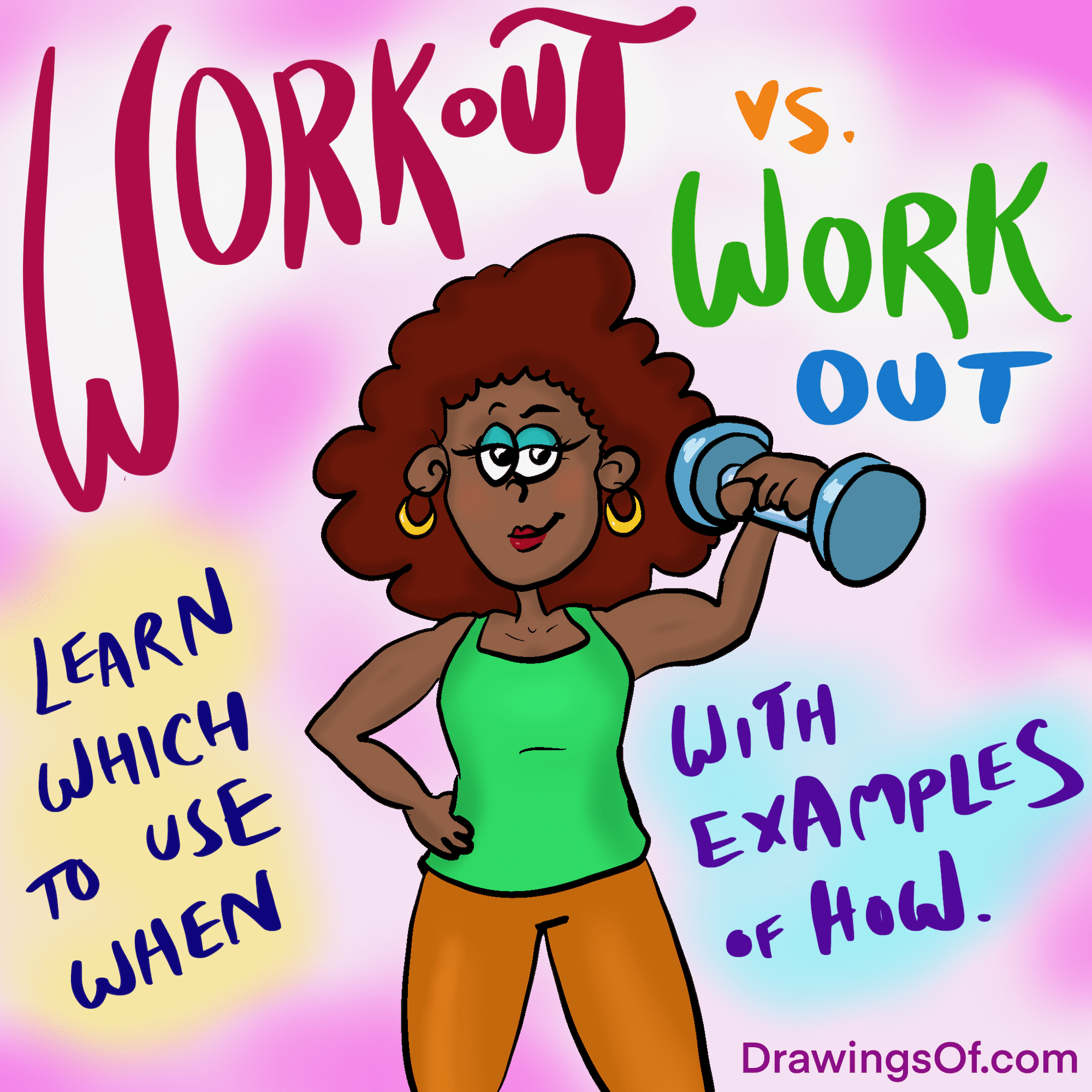 Work Out or Workout?

"To work out" is a verb meaning to exercise, while a "workout" is a noun explaining the actual exercise. People mix this one up all the time!

Homophones are words that sound the same, but have different spellings and meanings. This can cause a number of writing problems, when you're trying to decide whether to type one or the other. 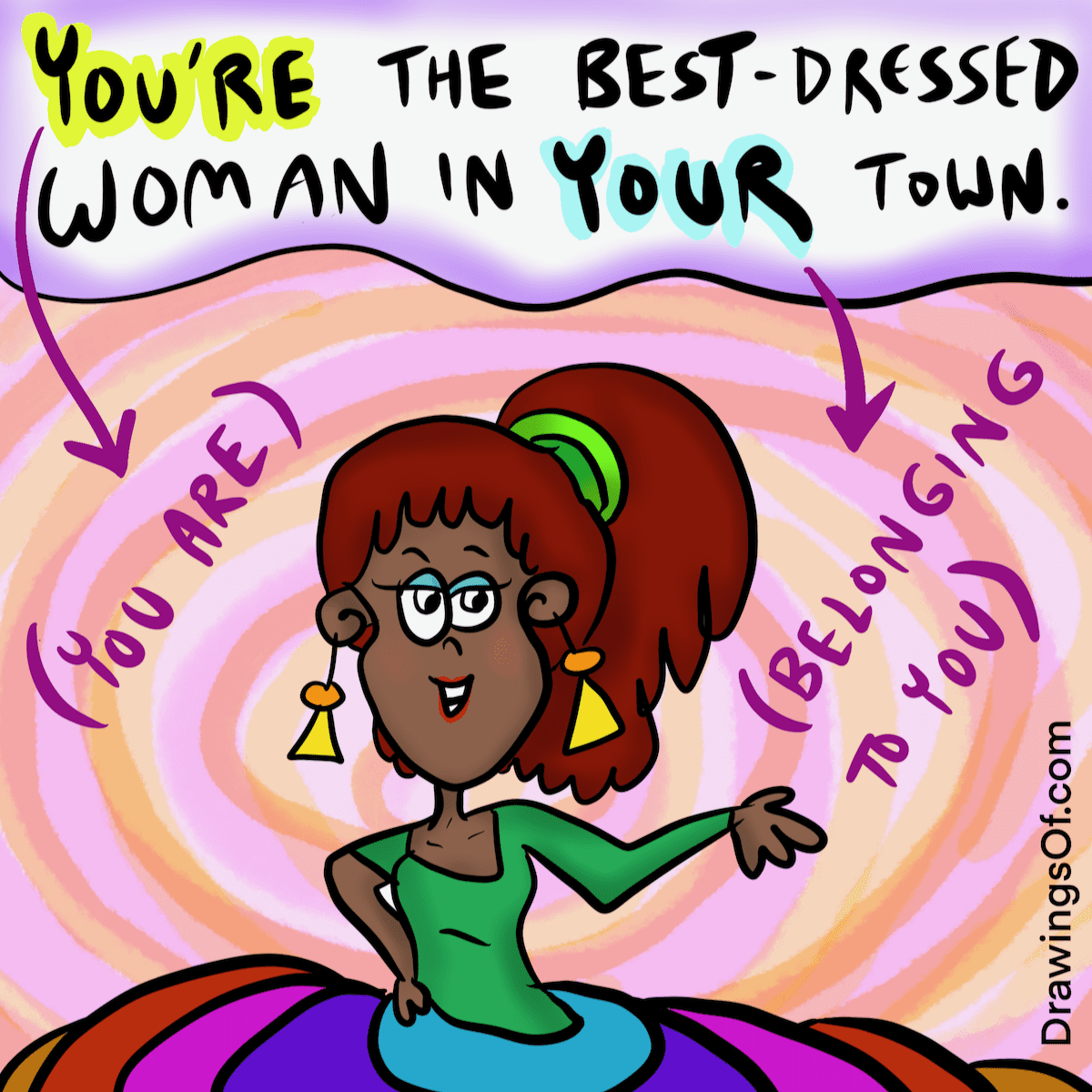 The short words "it's" and "your" and "there" may seem easy, but in fact they're some of the most frequently misspelled words in the English language, and thus some of the most difficult! These cartoon illustrations will help teach the difference. 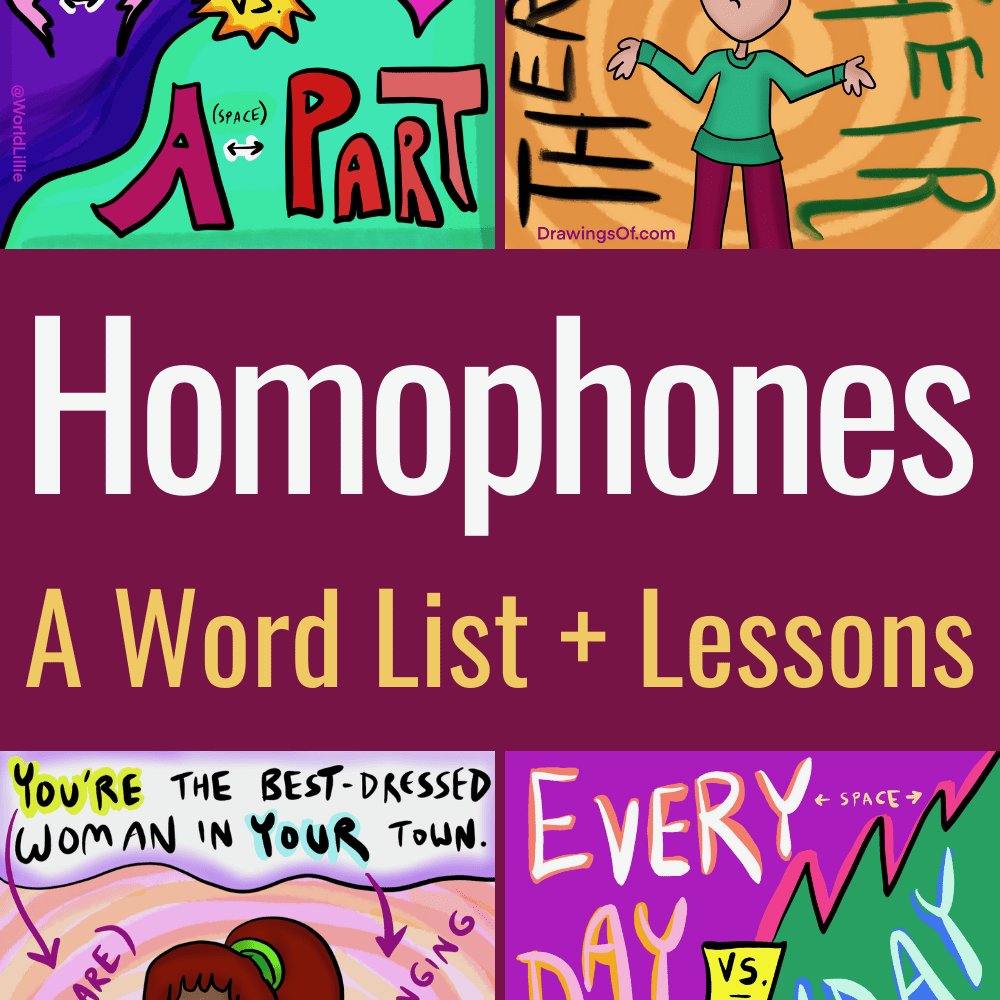 Here is the full list of all the homophone lessons I've illustrated, including "Whose vs. Who's" and "Passed vs. Past." They are some of the most frequently misspelled words out there, for all ages!

Which Words are Hardest to Spell for YOU?

Which of these hard words to spell in English is most confusing for you to remember? I hope the memory ideas provided in each linked lesson above help to recall correct spelling the next time you’re writing or typing these tricksters.

I’m always adding to this list, so if there’s a word that’s not included here that you’d like me to illustrate, just leave a comment or send a message, and I’ll get to it. Happy spelling! 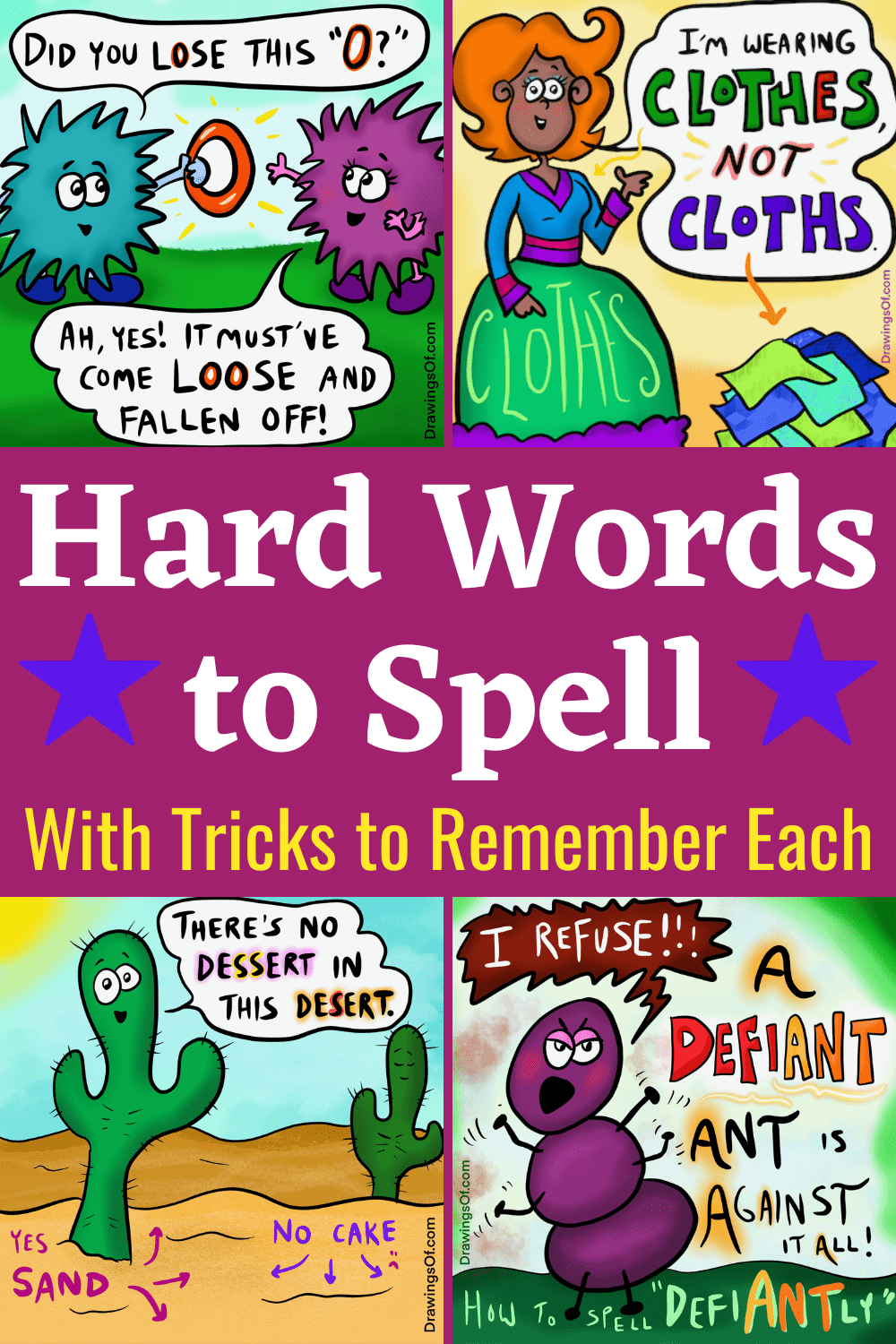