Having just toured the largest cave in Pennsylvania, I’ve got cave vocabulary on my mind… and no cavern words are more famously confusing than remembering the difference between stalactites vs. stalagmites. Which cave spikes go upwards, and which go down? Let’s learn the definitions and examples through some fun and memorable cartoon illustrations and mnemonic devices.

Stalactites are defined as the spikes that hang DOWN from the CEILING of the cave like drippy ice cream cones. They usually have a point at the end, and are formed much like icicles are — except instead of freezing water accumulating in that cone-shaped spike, it’s minerals building up as water drips from cracks in the ceiling.

How to Remember Stalactites

One way to remember the direction of stalactite is to imagine someone clinging TIGHT (“tite”) to the ceiling so they don’t come crashing down to the floor. Another trick to recall that stalactites protrude from the top of the cave is to notice that the word has a “C” in the middle, echoing the first letter of “ceiling.” It also has “Ts” like “Top,” mirroring that the spikes originate from the top of the cave.

The ultimate way to remember the definition and spelling of stalactites, however, is to picture a girl named “Sta” dangling her legs off a pier, then a fish coming and grabbing her tights off her, meaning Sta now LACKS TIGHTS (“Sta-lac-tites”) and her legs just hang down, bare. Hehe — does that help you remember?

Stalagmites are defined as the spikes rising UP from the FLOOR of a cave. They are formed by minerals (especially calcite) slowly dripping down and accumulating. Stalagmites often have rounded or flat tops, and are more mound-shaped than spiky stalactites.

How to Remember Stalagmites

There are several tricks to remember the definition of stalagmites. First, there is a “G” in the middle, which is also the first letter of “ground” — the place the spikes rise up from. Another (creepy-crawlier) memory device is to focus on the “mites” ending of the word and visualize bugs called mites crawling up your legs from the ground, mirroring the upward curve of stalagmites — ew!

A Sentence to Memorize Stalactites and Stalagmites

Finally, let’s put it all together: Hold TIGHT to the stalacTITES on the ceiling or you MIGHT fall on the stalagMITES on the ground! (For more memorable mnemonic devices, check out “How to Spell Dilemma.”)

When Stalactites and Stalagmites MEET

What happens when stalactites and stalagmites grow so long in either direction that they meet in the middle of the cave passageway? Why, they make a column or pillar! Mind you, these speleothems (cave features formed by the deposit of minerals) grow so slowly that that entire process can take thousands and thousands of years.

Can You Tell Stalagmites and Stalactites Apart Now?

I hope these cartoon illustrations and memory tricks have been helpful in remembering the difference between stalagmites and stalactites! For other useful English lessons on commonly confused words, check out former vs. latter, topic vs. theme, mood vs. tone, homophones examples, and literal vs. figurative.

So what about you? Have you ever SEEN stalactites and stalagmites in real life? Do share your experience in the comments section! 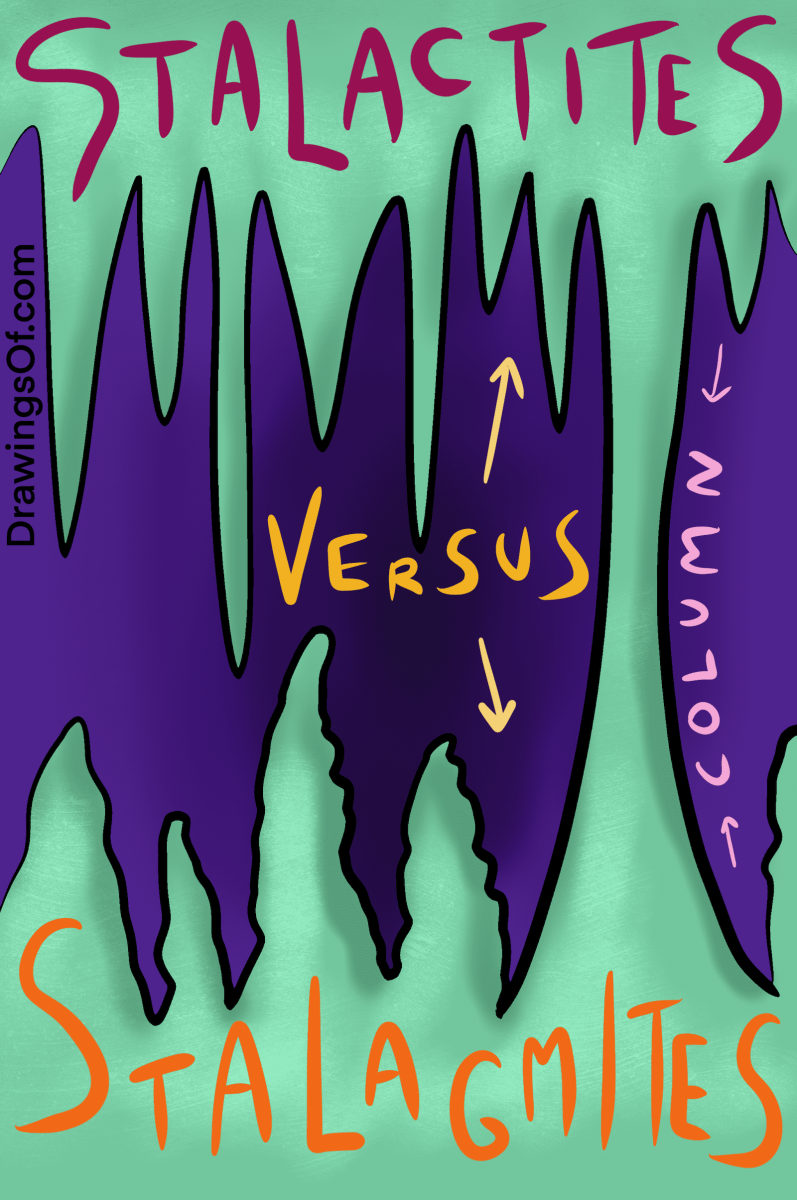 So cool! I love your explanations, and your cartoons.

I've seen them both in several caves, what a great memory trick. I've learned another one, but that's because I live in the Netherlands and the words for both of the, are slightly different.

Now I'm curious what the memory tricks are in different languages!

This is just what I was taught as a kid. I went to somewhere called Wookey Hole (yes really - I live in the UK) and I remember my mum telling me the tight and might stories

It's such a great memory trick for kids -- and adults too! Love the name "Wookey Hole."