Some homophones (words that sound the same but mean different things) are downright DANGEROUS. There’s one in particular which I’ve seen cause heartbreak when mixed up! You guessed it: apart vs. a part. Whether you write this sound with one word versus two makes a world of difference — and can cause smiles or tears. Let’s see why.

“Apart vs. A Part” Definitions and Meaning

Why “apart” and “a part” are such dangerous homophones is that they mean the opposite of each other, but in a hilariously illogical way. Time to dive into the definitions and examples.

The Meaning of “A Part”

“A part” means “part of” or connected to: a piece of a whole. This is ironic because the phrase is written as two words that are APART or separate from each other. There is a space between “a” and “part!”

“A Part” in a Sentence

Gaze at the love story in the cartoon I drew for you, above. The purple-haired character who’s on the left is saying, “I want to be a part of your life,” meaning they want to be connected to — or part of — the other character’s daily existence. So sweet!

The person on the right smiles and says, “Aww… thanks! Let’s get married!” in order to move forward with the plan to unite their paths together. When you think of the word “a part,” think of things being connected together — which is a funny difference from the fact that the phrase is broken apart into two words. Speaking of separating…

The Definition of “Apart”

“Apart” in an Example Sentence

Look at the tragic story in the cartoon I drew for you, above. The blue woman on the left is saying, “I want to be apart from your life,” meaning she wants to distance herself as far away from the guy on the right as possible, and separate from him. So cold!

The guy on the right gasps in reply, “What?! You’re leaving me?! Aghhh!” He is devastated that his cute blue partner no longer wants to be with him, and perhaps is thinking about all the happy times they had together in the past, and how those days are now over. Though his (now former) partner is literally blue, the man on the right is now feeling figuratively blue — or dejected. Wah!

See the Difference Between Apart vs. A Part Now?

Is the danger in mixing up “apart and a part” getting clearer now? Say one, and you’ll likely get a grin. Utter the other, and there could be a slap! Just remember: the word that’s written together (apart) means separate from, while the one that’s written as two words that are separated (a part) means together with! Opposites indeed.

Apart vs. A Part VIDEO:

I hope this “Apart vs. A Part” lesson has been helpful, and that my cartoons are memorable enough to stick in your mind and help remember these tricky-to-spell words. Feel free to check out my other English lessons, including fan favorites, “Roll vs. Role,” “Topic vs. Theme,” “How to Spell Dilemma,” “Liminal Space,” “Everyday vs. Every Day,” “Mood vs. Tone.” Happy ELA learning! 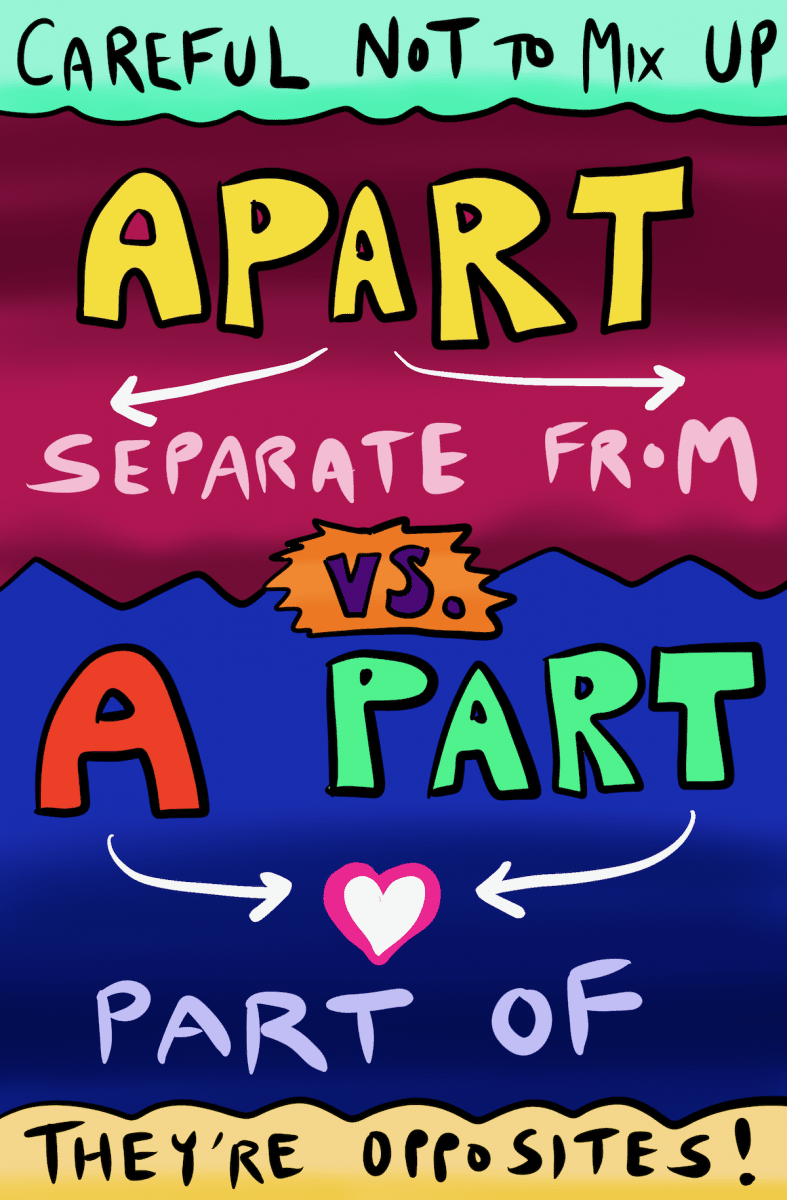