What Does it Mean to Juxtapose?

One of my favorite literary devices — life as well as books and art — is Juxtaposition. Juxtaposing is when very different things are put close together, so the viewer or reader gets a shock or smile when they notice the contrast. Here’s a cartoon example with two very different moods juxtaposed:

Viewing the drawing, you may have grinned from the juxtaposed contrast of the sharp, spiky hair and attitude on the left with the smooth and serene expression on the right. Juxtaposition is useful in creative drawings and art to make differences stand out. In the example above, the left fellow’s fury POPS off the screen because he’s so much madder than the lady.

Juxtaposition in Art and Color

Color, lines, and subject matter can all be juxtaposed to great effect in the art world. (One of drawing’s benefits is you can make anything ANY color or shape.) For example, the super light eyes in my drawing below are sharply juxtaposed with the dark makeup and hair, making them jump off the page!

If you’re into photography, experiment with juxtaposing hues, lines, textures, and subject matter to boost excitement. For example, when I pose for photos for my travel blog, I make sure to pick dress colors that sharply juxtapose with the background to make both my outfit and the destination pop off the screen. (Ex: A red dress in front of a green forest.)

Juxtaposition as a Literary Device

Though sometimes it’s easier to see and define juxtaposition visually, it’s all over literature and text. (I’m an English teacher. You knew the school reference would happen!)

To find juxtaposition in a book or short story, look for the contrast — and what that contrast helps make stand out. Sometimes juxtaposition happens between the actions of two characters, or between the context and situation or person. (Speaking of “between” — make sure to check out the “liminal space” lesson after this one!)

One example (which also is relevant for real life) would be if two people have very different punishments for the same action. Juxtaposing those contrasting outcomes is vitally important because it can highlight prejudice or unjust systems that need to be changed.

Juxtaposition in TV, Movies, and Life

Though juxtaposition is a literary term, it’s sure relevant to TV, movies, and real life! (Same with foreshadowing.) One example is with height — a realm ripe for visual contrast. Height juxtaposition is often used for comic effect in movies or TV, for example, The Marvelous Mrs. Maisel filming 5-foot-tall Susie Meyerson arguing with the towering six-foot-tall Sophie Lennon.

VIDEO: How I Drew These Illustrations

The actor Danny DeVito is also frequently used for visual height juxtaposition jokes. Juxtaposed height jokes are also daily features of my own life as a muscular six foot tall woman, as onlookers delight in pointing out the size contrast between me and my friends!

So what about you? Have you seen great juxtaposition examples in literature, TV, or life? Do share!

A Cartoon Dragon Story for Smiles

A Teacher Explains the OTHER Education 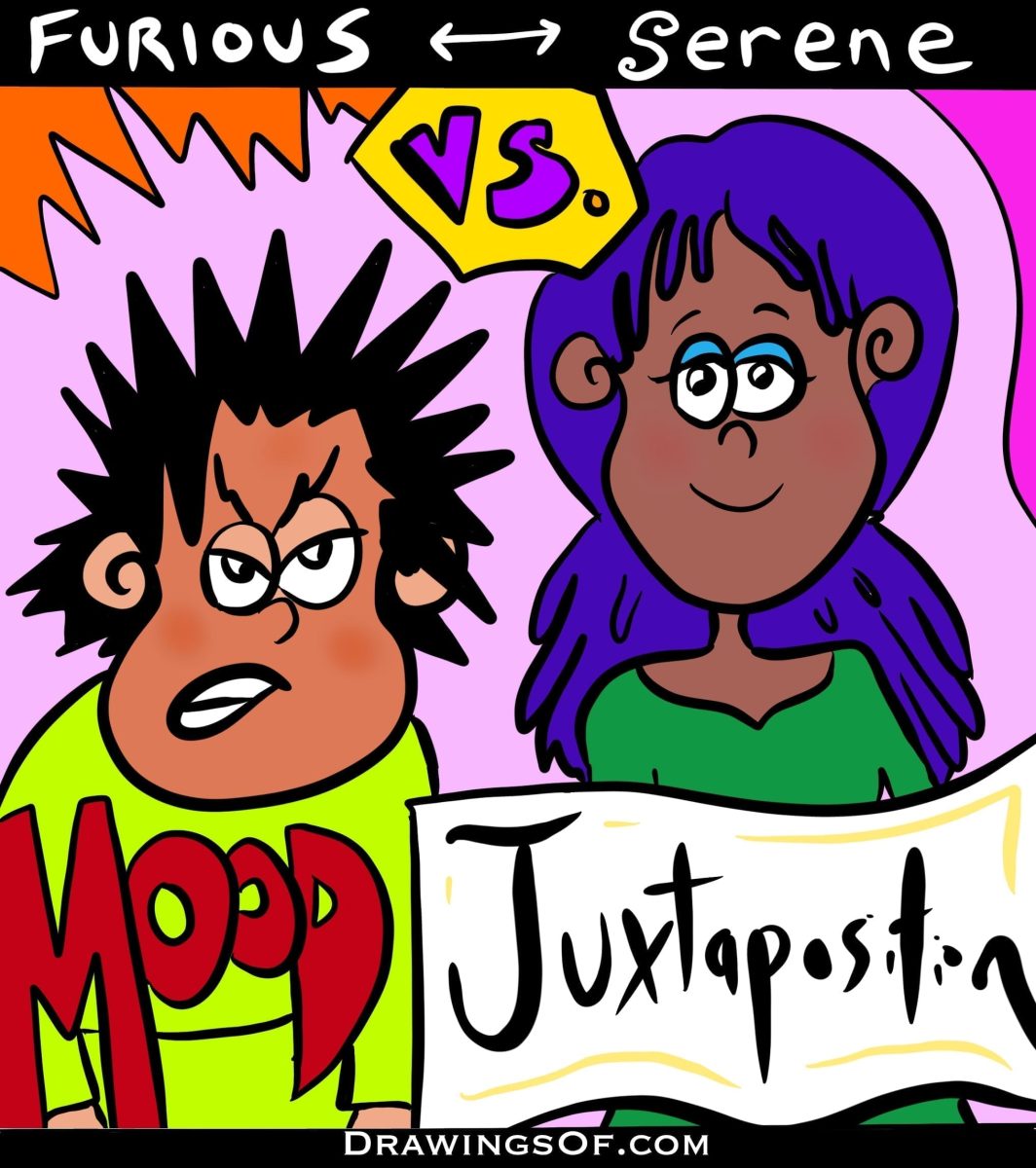 20 thoughts on “Juxtaposition Examples in Sentences and Art”

About Drawings Of…
Stories for Kids
Sitemap
Request a Drawing