Seeing the popularity of my recent article, “Everytime or Every Time?” it’s clear: readers are hungry to figure out which English words exist, and which are just plain made up! Thus it is with great excitement that I bring you the next installment in this series: “Incase or In Case?”

Is the Spelling “Incase,” as One Word?

The answer to the “incase or in case” question is that NO, the word “incase” (spelled as one word with no space) does NOT exist! It is a figment of your imagination. It is a unicorn flying off into the distance in a poof of smoke. It is not in the English language. Do not use “incase!”

Incase vs. In Case

Yes that’s right — when people type something like “Just incase you didn’t know…” or “I brought an extra umbrella incase it rains,” they are committing an error. So, since now we know that writing “incase” as one word is wrong, what is the correct spelling?

This is where things get a little more complicated, because there are two possible answers to what people mean when they write the typo “incase” — either they mean the phrase “in case,” or the verb “encase.” In 95% of instances, when people type “incase,” they actually mean “in case,” which always should be written as two words with a space in the middle. So what does “in case” mean?

The phrase “in case” has several common synonyms, the clearest one being: “if.” Other definitions and meanings of “in case” include: “in the event that,” “in order to be prepared for something,” or “as a precaution against.”

Example Sentence with “In Case”

The phrase “in case” is most often used with the word “just” in front of it, like: “Just in case you didn’t eat lunch, I packed three broccoli sandwiches in my bag for you.” Here, we see “in case” means “in the possible event that…”

A hip and cool slang abbreviation using “in case” is “ICYMI” which stands for “In case you missed it.” People use this abbreviation to share important things with people who may not have seen them already — and by “important things,” I mean videos of cats tap dancing.

In Case or In Cases?

Like the misspelling “incase,” the phrase “in cases” (with an “s” at the end of “case” to make it plural) does not exist in English. While it would seem to make sense because the meaning of “in case” is about all the possible things that could happen, which would be plural, the phrase is only ever written as the singular “case.” (That is, unless you’re the Portuguese actress in the movie Love Actually who very charmingly tells the man she loves that she started studying English “just in cases” he might come back and they could get married.)

“In the Case That”

Now that we know what “in case” means, how is it different from “in the case that?” Well, the latter (second) phrase, “in the case that,” is more formal and focused, and indicates a greater seriousness of consideration than “in case.”

For example, saying “In case it might rain” suggests that there’s a possibility it might rain, but it’s one of many possibilities. In contrast, uttering “In the case that it might rain” implies that the person is really thinking through the weather, and will almost certainly pack accordingly.

Taking this one step further along the continuum of certainty, saying “In that case” means fully considering the scenario in a serious manner. For example, “There are huge dark clouds outside? In that case, that’s probably foreshadowing rain, so let’s bring umbrellas.” The use of this phrase indicates that a decision will surely be made due to the emerging situation.

Finally, the phrase “in this case” means you’re looking at one specific scenario in order to talk about what is to be done in that unique context. For example, “You want a cookie? In this case, I can say yes and give you one because we have lots of extras today, but in the future, I may have to say no.”

To remember the spelling of “encase” — vs. “incase,” which is incorrect — remember the “e” by visualizing a hug — an EMBRACE — that ENCASES another person, or wraps them in the enclosure of their arms. (My drawing above illustrates this memory device.)

An example sentence using “encase” would be: “I want to encase my computer in a protective cover because my dog keeps knocking it on the floor and I need it protected!” Again, visualize the computer cover giving a hug or embrace to my precious laptop.

Incase or In Case or Encase, in Sum

I hope you’ve enjoyed this hand-illustrated lesson on incase vs. in case and encase. In case (haha) you are eager for more commonly confused words that deal with spaces, specifically, check out “Workout or Work Out,” “Everyday or Every Day,” and “Apart or A Part.”

Have another English lesson you’d like me to draw cartoons for to explain? I’d be happy to — just leave a comment below or message me! 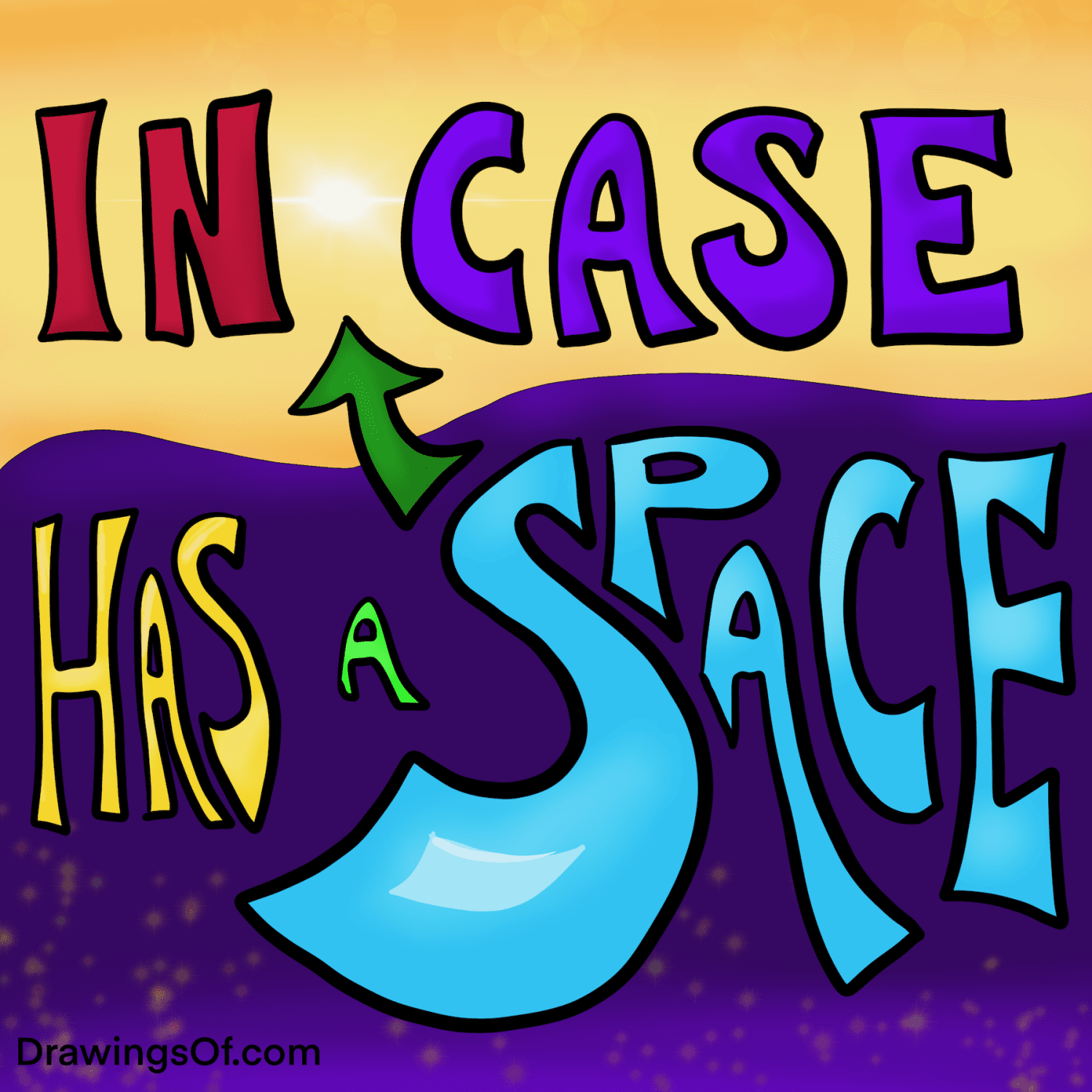