Some of the most popular articles on this site are my drawings of the colors of energy I see during healing work like Reiki, meditation, or acupuncture. Judging from the comments pouring in on “Seeing Purple and Yellow During Meditation,” people who experience this phenomenon are hungry to understand why it happens — but also what it means.

To continue this investigation of seeing chakra colors (following my recent article about seeing red), here are my illustrations and thoughts about the experience of seeing white light during healing energy work. As for my qualifications to write and illustrate this, I’m a trained Reiki Master who has been practicing for several years, and who truly sees these colors, as evidenced by my attempts at recreating them through my digital drawing tools.

While the usual colors I see during my solo meditation and energy healing are purple and yellow, those meditation colors are tinged with a white glow. That said, I REALLY see white light when I’m doing Reiki or other touch healing work with a person who has what I would call strong white aura energy. What does that look like and what does it mean?

White is the Crown Chakra

The color white is correlated with the 7th Chakra — the Crown Chakra — which is located on the top of the head. (That Sahasrara Chakra is also indicated by purple or violet light.) This 7th Chakra is the energy center on the human body which connects with the wider mystical world, universal energy, and divine “Source.” It is about spiritual surrender versus earthly attachment.

When I see white during work with Reiki clients, I usually experience it as a sparkling vision that moves like stardust, as I tried to show in the illustration above. In contrast to the medium-sized blotches and designs I see with purple and yellow, the white I see is very delicate and intricate, like lace or netting, and I can see the darker colors behind it.

What Does Seeing White Light Mean?

In our popular culture, seeing white light is closely connected to the idea of healing, especially with some divine or spiritual intervention, and an acute experience of the liminal space between life and existence. Indeed I believe that in general, seeing white light indicates a positive shift and cleansing.

For example, a recent Reiki client just shared that when my hands were on her, she saw a vividly bright white light. This must have been something in her energy field shifting, because she told me that that night, she slept better than she has in years. Surely it would stand to reason that the color of the “highest,” spiritually-connected chakra would bring positive results.

Concerns with a White Aura

I don’t want to say that seeing white or having white energy is always positive, though, because everything has a shadow side. In the case of people I know with very clear white auras, their issue is that their “heads are in the clouds” a bit much, and they might benefit from grounding practices. In other words, they might have perfectionistic streaks, or be so focused on the broader world that it’s challenging for them to connect with people on an earthly, centered level. They might come across as wispy or nebulous in spirit.

Think of white light as the opposite on the spectrum (chakra-wise) to red energy, the second orange chakra, or the black energy of the Earth Star Chakra. Red is the First or Root Chakra, which is about being powerfully grounded in the earth, literally and figuratively: safety, base needs being met, and freedom from fear. Tactilely, red would feel solid and firm, while white energy is airy and floating.

Now, this article is about the pleasant experience of seeing white sparkles with eyes CLOSED during energy work or meditation. However, if you are curious about the phenomenon of seeing white with the eyes OPEN (which frankly can be much less enjoyable, and only questionably spiritual), do read my article, “Seeing Sparkles in Vision.”

What are YOUR Thoughts on Seeing White?

Have YOU experienced seeing white light, chakra energy, or auras, either as an energy worker, or someone experiencing healing or bodywork? Have you seen other colors of auras during meditation or bodywork, like a blue aura or green aura? What do you make of it? Do share! 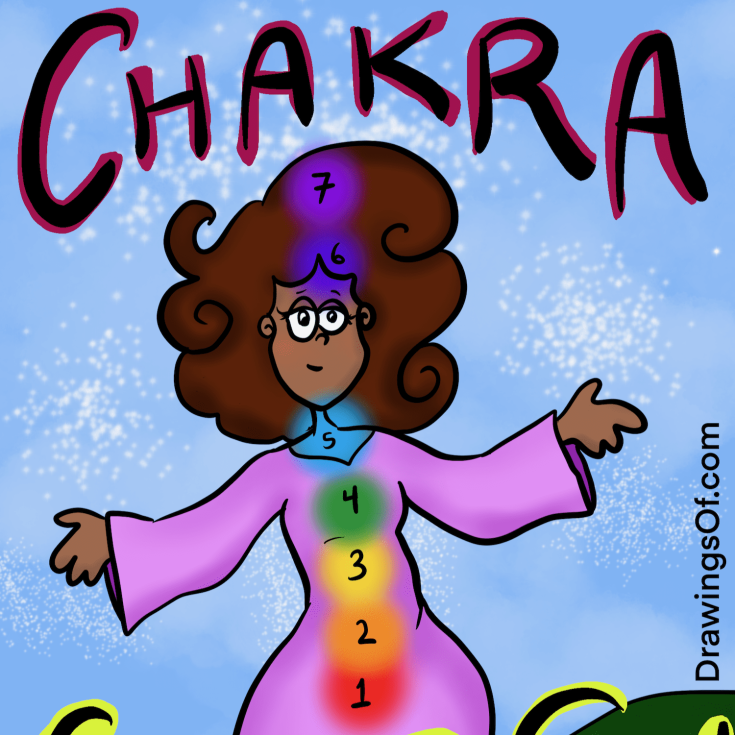 Here is my overview diagram of which colors correlate with which chakras, energy centers, and meanings in the body. 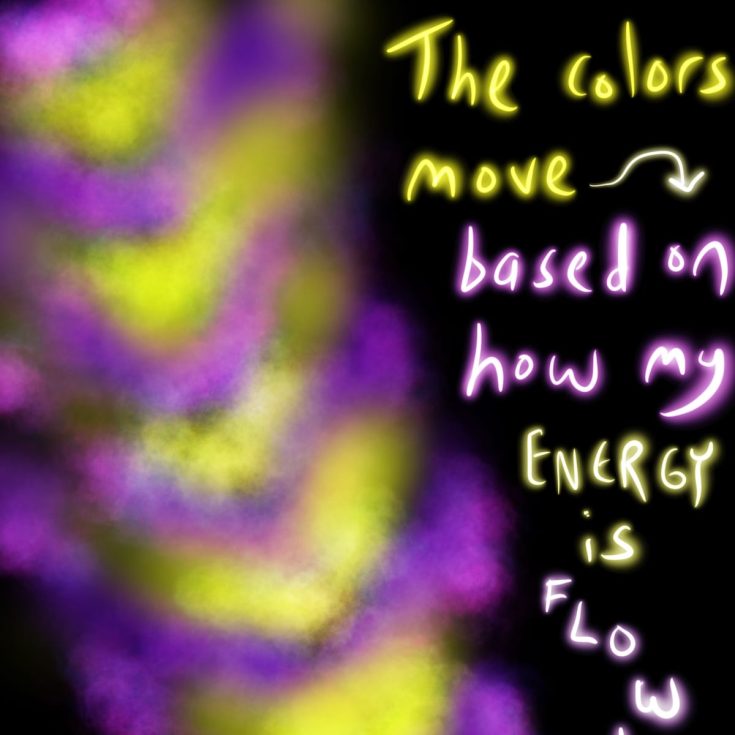 This is my original article which many people have written in about, saying that they also see purple and yellow during energy healing! 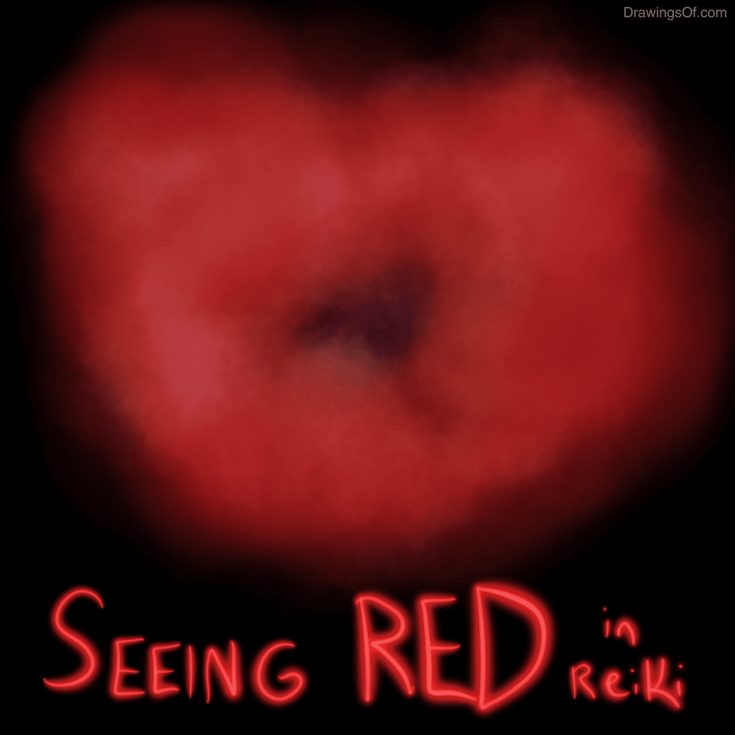 I wrote this article about seeing red after several Reiki sessions in which a client's red chakra energy was highly visible -- sometimes mixed with black or orange. 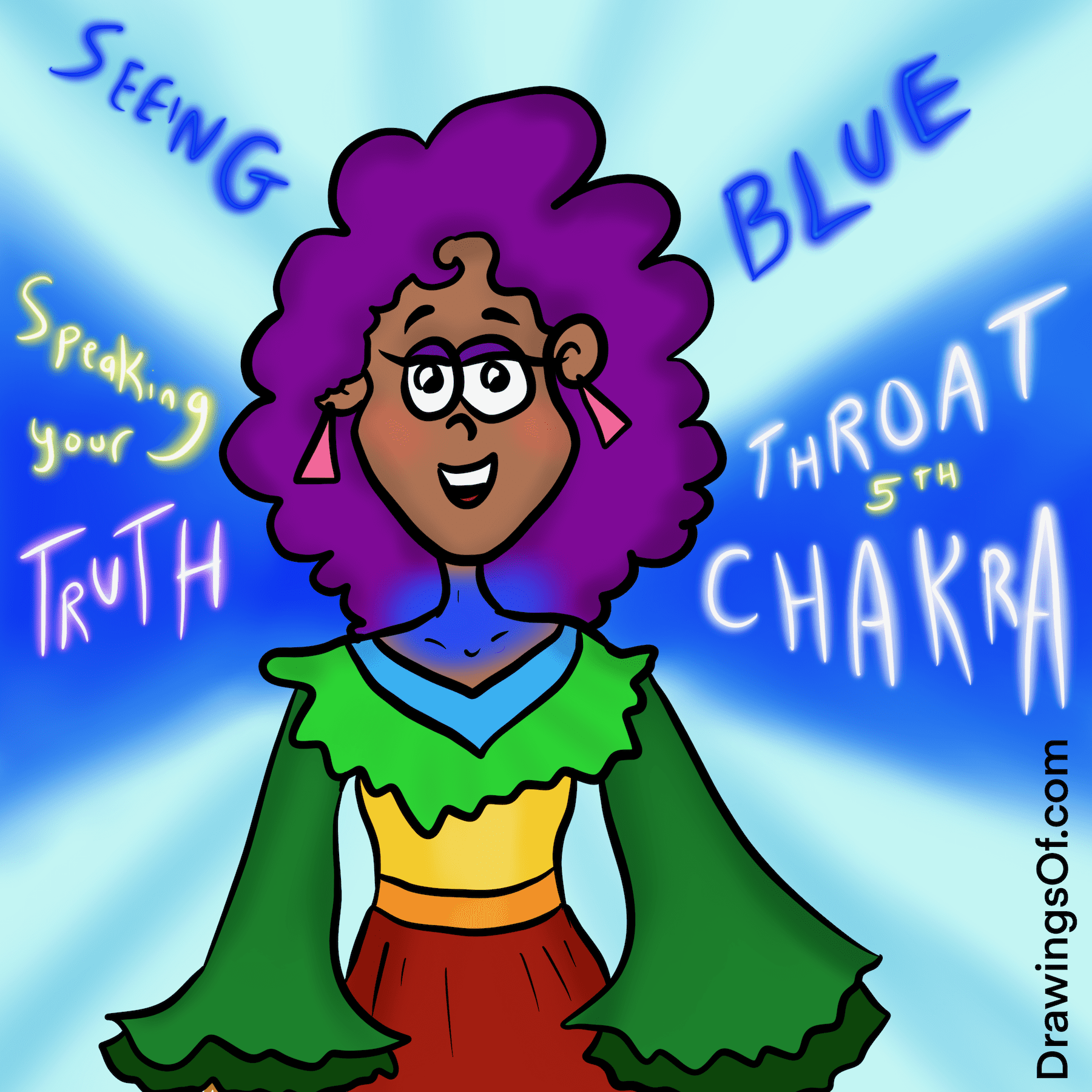 The 5th or blue chakra is located around the throat, and is associated with speaking one's truth effectively. This helps understand what the meaning of a blue aura is -- read on to learn! 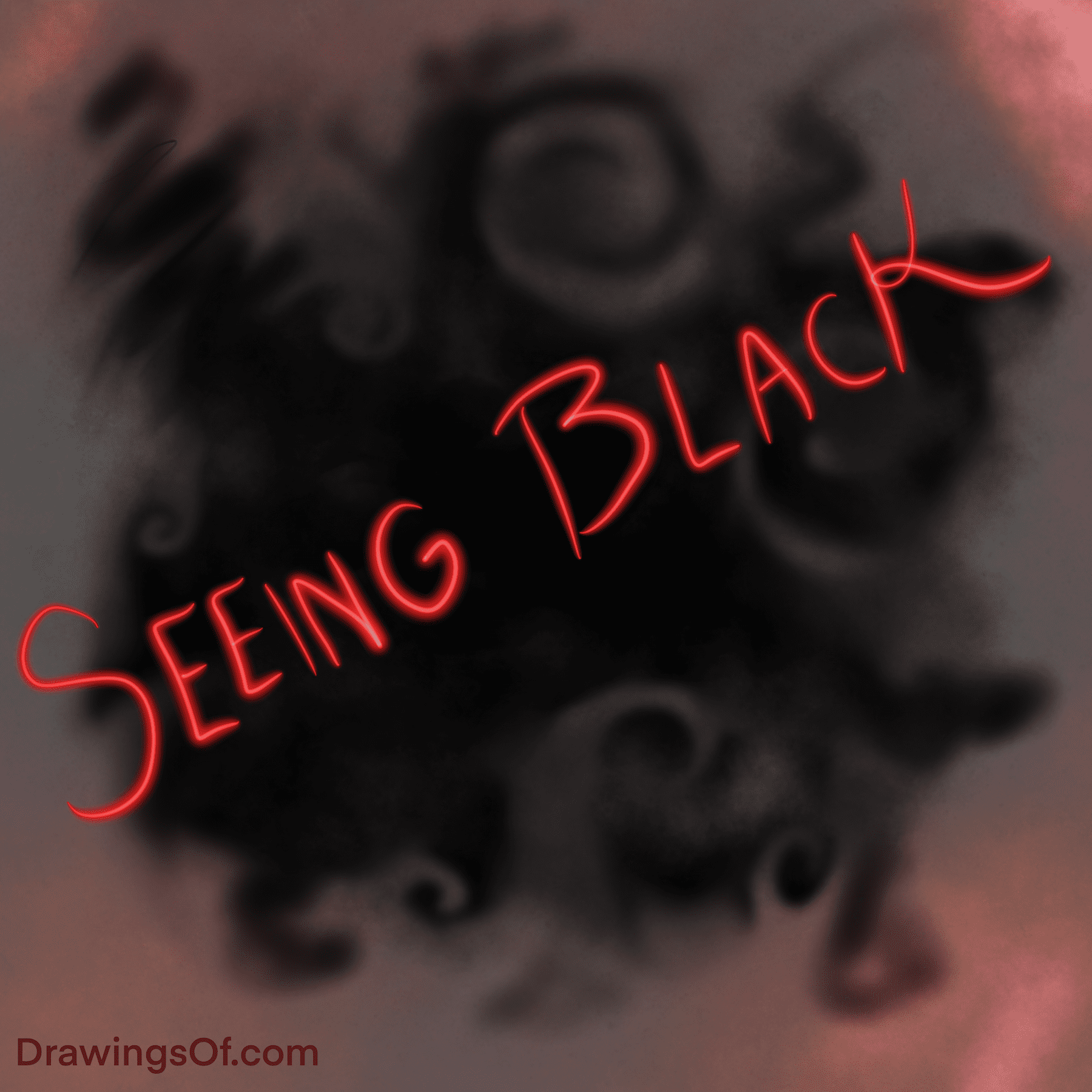 Don't be worried if you or someone you do energy work with has a black aura or sees black! It's actually a very exciting and useful color. Learn more here.

If we're to examine beyond the Seven Chakra System to the 12-Chakra one, the opposite side of the spectrum from seeing white energy (a very high chakra) would be Chakra Zero: the black Earth Star Chakra. Learn more about its power here. 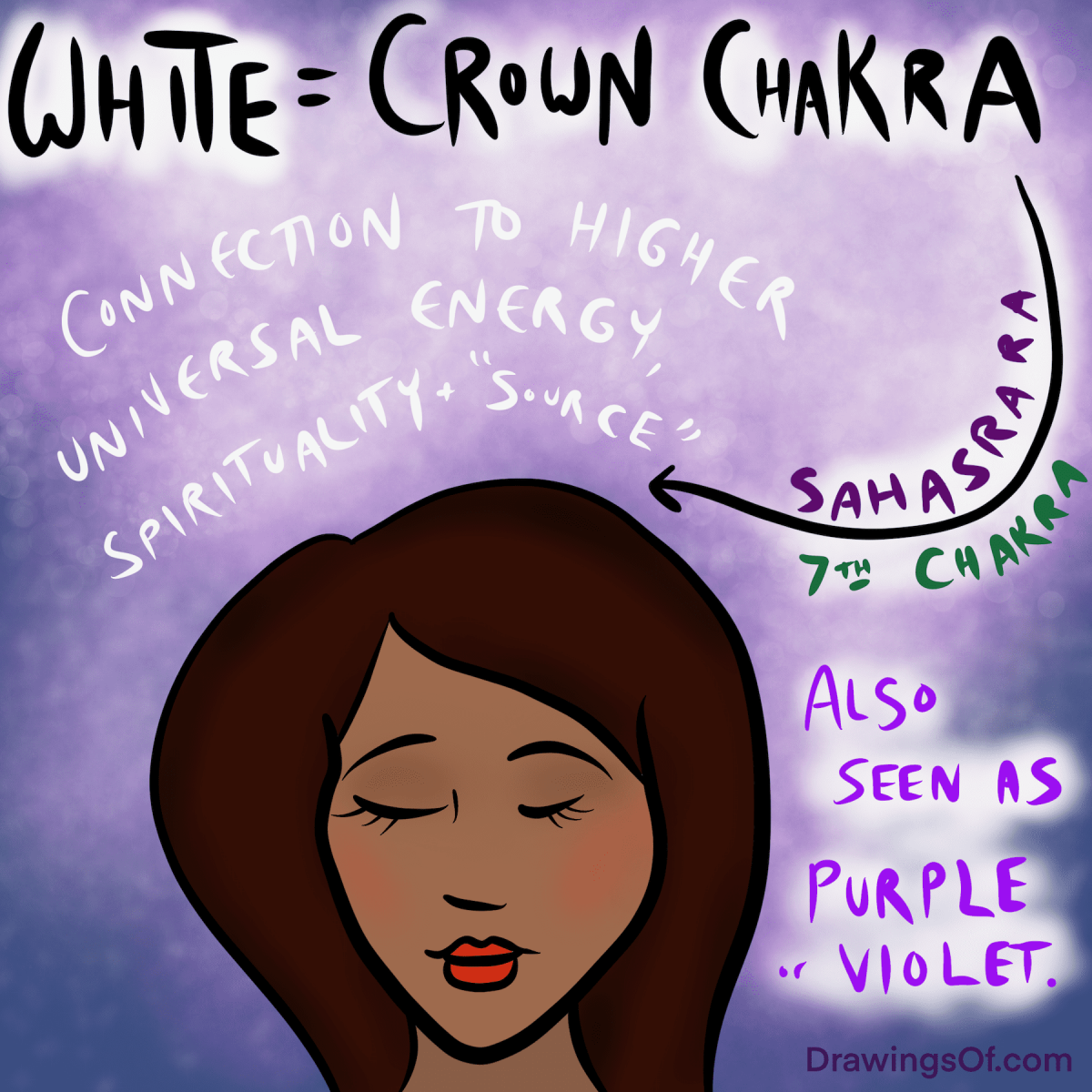 I found this page when searching for what I see when I close my eyes. I’ve been using natural things to aid my healing. Black seed oil, zeolite, pine needle tea etc, and listening to 432hz. I’ve also been piecing together a lot of events in the world linked to the past. Today when I closed my eyes I seen the white energy with what looked like circuit boards been drawn. Very white and bright. And so clear.

I am a Reiki 1 & 2 practitioner. My guides and my client’s guides show me colors to follow, often two at a time. One for my left hand and one for my right. When I stopped following them, they stopped showing me; so I always flow as guided. My guide is a red sphere and he stays to the left. When I see a red and black field, I understand that to be the Earth Star and it is always high and in the middle. Others fields tend to present from the right side of my inner vision. When I tune into the chakras, they tend to stay a bit to the right as well. I was doing remote Reiki and invited the client’s higher self in to guide as well. It was amazing! It came in as a simmering gold and white amorphous cloud. I’ve seen a depiction of Celestial Body and it looked just like it. I’m not sure about inviting another’s higher self in, but this one was a highly spiritual session. I wept. As far as the colors I see the most,loads of mushrooming purple and white, with some green mixed in or red sometimes.

So much fun and so very cool. I’m so grateful to be able to tune in and vibrate.

What a beautiful and helpful description, Janine! I've never thought about the side the colors are on, nor about how they relate to Guides, but these are very important insights. Thank you for taking the time to share.

i see white chakara what can i do thank you

Here's my new article about seeing the white chakra: https://drawingsof.com/seeing-white-aura-chakra-energy-healing/ . To sum up the answer to the question "What can I do," there are many possible answers, but the biggest thing would be to not worry -- it's a positive window into universal energy, and what there is to do is enjoy and explore it, and listen to it guide you. Sending you best of luck!

I used to be extremely religious when I was younger and I remember seeing lights when I would close my eyes, normally white lights. I would always close my eyes on car rides to see those lights because I enjoyed it and sometimes I’d feel something that resembled being on a rollercoaster. As a kid it didn’t make sense other than it left me feeling happy. Growing up I’ve lost all connection with the spiritual side of myself, I needed facts and science to make sense of a “god” the way it was portrayed to me in church. A “man” above us who decided to create the whole universe didn’t make sense and it caused me to not believe. I’ve recently gotten heavily into space and am started to connect dots between space and religion. I’ve been asking spirit guides/god or some higher being to help me connect the dots fully and bring me peace. Now I’m starting to see the white lights again but with this purple “blob” (kinda like a cloud) that starts to show up, it’s big and moves around. The more I read about what it means the more emotional I get because it makes total sense. Thank you for helping me with some clarity!

Chloee, thank you for taking the time to share your experiences. You are definitely not alone, and there is so much to be discovered in this!

I’ve been seeing swirling white light in meditation. Also purple and sometimes gold. It first started waking up at 3 am I’d see swirling white light. I’m new to meditation and now I’m seeing it regularly in meditation and sometimes if I close my eyes it’s there. I’ve notice Listening to sacred acoustics helps bring in on. I’ve only just come across your website, I would love to here your thoughts. Thanks in advance your website is amazing cheers steve

Hi Steve -- thanks for sharing your experience with seeing white light, as well as other colors! That's a fascinating detail about music and acoustics intensifying the phenomenon. I'll keep you posted with what emerges from my research, so do subscribe to the monthly newsletter to stay connected.