Do you know any children (or maybe even adults) who need a little help learning what to do when they mess up or break something? Read on for this fun short story — illustrated with cartoons!

The Mess-Up: A Break in the Snake

Once there was a young boy named Moe who liked playing with anything he found, pretending to make it zip through the air. One day he was zipping around with his Daddy’s bright green snake sculpture — when the sculpture slipped from his hand and SMASHED upon the ground! What should Moe do next???

What to Do After Breaking Something?

Moe’s eyes became huge and round as he pondered the quandary: Should he tell his parents about the snake break, or could he just hide the broken pieces and pretend nothing happened? He stood frozen in a liminal space between the two options for several minutes before making his decision.

Moe wrapped the snake parts in a purple blanket and ran out of the room. It seemed like the easiest and fastest option to him. Do YOU think this is the best choice? What do you think will happen next?

Moe was “innocently” sitting in his room when he heard a holler. “ARGH!” It was his father, who had just found the shattered sculpture under the blanket. “Moe,” his Daddy asked, “did you break my snake then HIDE it?!”

With a gulp, Moe thought hard about what to do next. Just then his Mama walked in and realized the situation. “Sheesh,” she said, seeing Moe huddled in the corner. “Just say sorry and help clean up!”

Mama Explains What to Do After Messing Up

As Mama’s wise words filled the air, Moe’s heart pounded. “CLEAN UP?!” he exclaimed, “That will take SO LONG! Yargh!”

Moe’s mother sighed: “No tantrum needed, my dear.” But it was too late. Moe’s mouth was as wide as melon as he screamed, “WAAAAH! NO! Cleaning up will take TOO MANY HOURS.”

Moe’s Mama, a mathematician, walked over to the desk and picked up a sheet of paper and some markers. “Let me show you something amazing,” she said with a magical tone in her voice. Moe trotted to her suspiciously, dripping tears like a fish drips water as it pops out of the ocean.

How Long Does it Take to Say Sorry and Fix?

“Let’s count how many minutes your options all take,” said Moe’s Mama. “If you lie and hide, then tantrum when found out, that takes a total of…” she began making tally marks while Moe counted by fives, “almost SIXTY MINUTES. Pretty much a whole HOUR!”

Moe gasped in surprise, but realized it was true. Hiding the snake had taken ten minutes, then hiding himself in his room was thirty. Now his tantrum had already sucked up fifteen minutes, and would likely go on much longer if allowed to progress. “What’s that on the right side of the paper?” he asked his Mama, eager for another option.

Moe’s Mama read from the top right corner: “The minutes it takes to say sorry and help fix equals…” she made quick tally marks while Moe counted along: “One, two, three, four, FIVE!” Moe clapped his hand to his cheek in shock. “See?” said his mother, pointing to the two juxtaposed options, “it’s FAST to fix the mess-up if you do it right.”

It Can Be Quick and Easy to Apologize

Now that he had seen the full context of his options, Moe knew what to do. He gave his father a big hug, said “SORRY!” and asked, “Daddy, how can I help fix my mistake?”

His father replied, “I forgive you, my little man, but I need you to help glue back together the snake sculpture pieces. Your Mama gave the snake to me many years ago, and it makes me sad to see such a special sculpture shattered.”

“Thank you for saying that,” said Moe’s father. “It’s a very important part of an apology to understand the feelings of the people you hurt when you messed up, then show you care about them.”

Moe and his Daddy worked together to mend the slithery green figurine. Yes, it took some real focus… but was done in just four minutes. Four minutes plus the one minute apology equals: FIVE minutes. So quick!

Later at dinner that night, Moe’s Daddy explained the last element needed to apologize effectively. “Moe-Moe,” said Moe’s father, using his favorite way of saying his son’s name, “It’s so important that you said sorry, listened well about my hurt feelings, and helped me fix the snake break… but there is one more thing that is important to do when you mess up, in order to make things right.”

“What is it?” asked Moe, intrigued, as he crunched his carrots. What do YOU think the last part of a good apology is?

“The last part of a complete apology,” explained Moe’s father, “is to create a plan to try not to make the same mistake again in the future!”

Moe was about to say, “That will take SO LONG,” but then he did a little counting in his head — and realized it would take two minutes to create a plan like his father was describing. Two minutes was how fast it took Moe to eat an ice cream cone. Fiercely fast!

“Ok,” Moe said, “Here’s one plan for how to not break your things in the future… What if I ask permission before I touch things that don’t belong to me before I play with them?”

“Brilliant,” said Moe’s father. “If you ask permission, we could very well say that you CAN play with the item, but we will help you find a creative way to play with it that will keep things safe. For example, if you had played with the snake by zipping it around the rug instead of the air, it probably wouldn’t have broken.” Moe nodded in agreement.

“I’m feeling good about our future plan, Moe,” said Moe’s Daddy, giving his son a loving squeeze, “so we can declare your apology complete. Hooray! We all make mistakes, my little guy, but what matters is that we learn and grow better each time.”

What Are YOUR Thoughts on Saying Sorry?

What was a time when you made a mistake and needed to apologize? How did it go? What are your thoughts about apologies now that you’ve read Moe’s story? Do share! If you’re looking for more short stories for kids, click here.

A Cartoon Dragon Story for Smiles

A Teacher Explains the OTHER Education 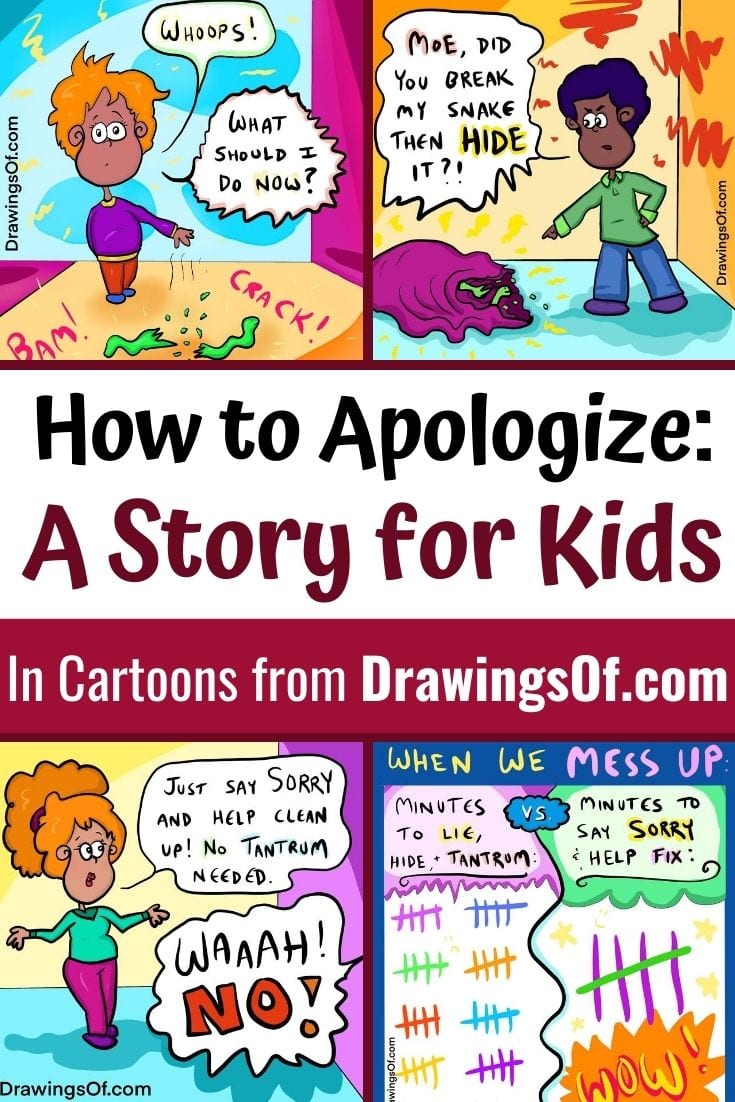 12 thoughts on “A Story to Teach Kids How to Apologize”

About Drawings Of…
Stories for Kids
Sitemap
Request a Drawing